Cotton, An Ancient and Modern Fiber 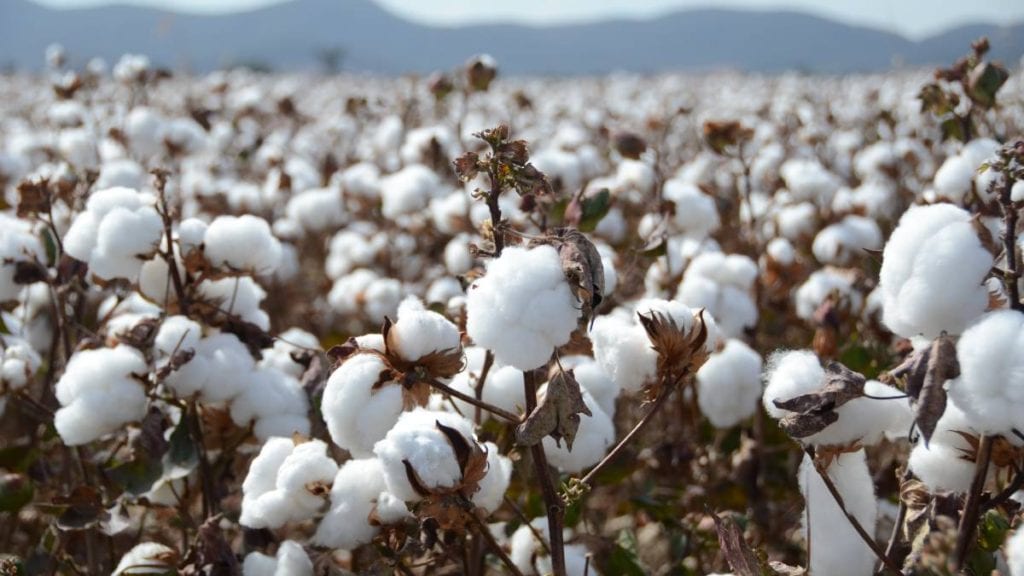 Many Uses in Mattresses

As Old as History

Cotton rivals linen as one of the oldest major textile plant fibers. According the Fair Trade Foundation, “Cotton is the world’s oldest commercial crop…” Cotton textiles were produced for trade thousands of years before the current era in India, Mexico and Peru, each using a different native species of the genus Gossypium:  G. hirsutum, G. barbadense, G. arboretum. A fourth species of cotton, G. herbaceum, is native to Arabia and to Africa south of the Sahara. Its fibers are shorter than those of the other species, so it is used more as an absorbent rather than for clothing.

Cultivation of cotton spread to Persia during the 400’s BC and to southern China about 300 BC. It became known to Europeans as a result of the conquests of Alexander the Great. Columbus discovered that cotton was being cultivated in the New World. It was brought north into the English colonies of Georgia, Carolina and Virginia. Then about 1820, Egypt began growing the long-fiber Peruvian cotton (G. barbadense).

Impetus for the Industrial Revolution

Where cotton was native, cotton processing – carding, spinning and weaving – developed. For thousands of years this was all done by hand, usually not far from where it was grown. Then came the Industrial Revolution, sparked by changes in processing cotton.

In England, Parliament restricted the importation of cotton fabric from India to protect English and Scottish wool and linen textile producers. But raw cotton could still be imported. By then, cotton cloth had become popular. To meet the demand, cotton spinning and weaving increased in England, and machines were invented and perfected to do these jobs. Not only cotton, but linen and wool textile production was mechanized, making England a major textile producer and exporter.

The cotton spinners and looms were powered by water first, then by steam. Steel production and sawmilling of lumber increased to build new factories. More ships were built to import cotton and export finished textiles.

Meanwhile, in the United States, the invention of the cotton gin spurred the shipping of cotton to Great Britain and increased production by cotton plantations while reducing the cost of removing seeds from the cotton. When the technology for spinning and weaving cotton was smuggled in from Britain, it stimulated textile industries in New England and North Carolina, in effect bringing the Industrial Revolution across the Atlantic. The use of powered machinery for cotton textiles led to machine production in other industries, and the Industrial Revolution was in full swing.

Social and Environmental Impact of Cotton

When the United States Constitution was written and adopted, the framers foresaw the decline of slavery. However, the rise of the cotton plantation economy in the South perpetuated slavery in its worst form. Slave labor was cheap labor, or so it seemed.

Slavery did not end until after a major armed conflict between the southern states and the rest of the country. The states that joined the Confederacy were major cotton producers, where cotton was king. In those slave states that remained in the Union, cotton was not the major part of the economy.

The disputes before the Civil War over the spread of slavery to new territories and states in the West was largely the result of soil depletion from cotton production. Intensive cultivation of cotton took most of the nutrients from the soil without putting any back in. This was before the widespread practice of crop rotation and commercial fertilizers. The land to the west was needed to keep producing cotton as plantation owners moved to more fertile soil, and they wanted to take their slaves with them.

Today we see similar issues. One, cited by the Fair Trade Foundation, is the low wages for cotton workers and low or no profits for small producers in developing countries. The other is the environmental damage done by soil depletion, excessive use of water, and overuse of fertilizers. Added to this are the toxic effects of pesticides and herbicides, both to people and animals where the cotton is grown and carried to market on the cotton.

The overwhelming majority of cotton is produced in three countries: China, the United States, and India. Most of China’s cotton is used internally, and the United States is the largest exporter. However, cotton production is a larger percentage of the economies of several Third World nations, such as Burkina Faso (58.7%) and Benin (26.4%).[1]

Use of Cotton in Bedding and Mattresses

Some early commercially produced mattresses were essentially all cotton, but most had other cushioning fibers in the filling, such as horsehair, straw, wool, feathers or kapok. A mattress at that time was a fabric ticking (a bag, usually cotton or linen) filled with cushioning materials (mostly fibrous). Cotton and wool were formed into batting – mats made by tying together long bound bundles of the fibers.

The filled ticking was sewn closed and tufted with long threads tying the bottom to the top. The tufting was anchored on both sides with buttons or knots. This gave the dimpled grid look we associate with a mattress. Tufting kept the materials in the mattress in place so they did not shift around as the mattress was used.

In 1940, the US Department of Agriculture encouraged people to make their own all-cotton mattresses at home and distributed circulars showing how to do it. 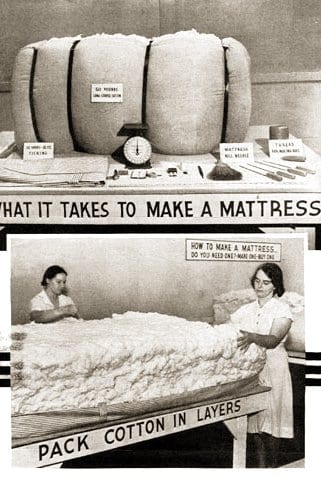 Today, there are some manufacturers making mattresses that are all or mostly cotton. A few of these are Gold Bond, Naturepedic, Green Goods, and Cotton Cloud.

With the introduction of woven wire mattresses, then innersprings, cotton batting was used for cushioning between the sleepers and the wire. Meanwhile, most of the tickings were still cotton. The padding was often quilted to the cover (the top panel of the ticking).

Now most of the cotton cushioning has been replaced with foam: polyurethane, memory foam, latex, Avena (a latex substitute), and others. But cotton is still widely used in covers for mattresses and foundations, as well as insulators separating sections of a mattress. Cotton is still popular for sheets and pillowcases (still called “linens”). A popular blended cover fabric is polycotton – polyester and cotton.

Environmental consciousness has led to a demand for materials that are pure, organic and sustainable, and this is true for cotton. Pure means that no unnatural substances have been added. Organic means that the cotton has been grown without pesticides or chemical fertilizers and is not genetically modified. Sustainable means that the methods of raising the cotton do not damage the local or global environment, stress water supplies, or deplete the soil. Additionally, many consumers want to know that the production of the cotton is socially responsible.

There are several certifications to identify cotton which meets these criteria, such as:

Cotton, one of the oldest textile fibers, continues to be one of the most used, even with the wide use of synthetic fibers as well as other natural fibers, and it still is an important material in many mattresses.