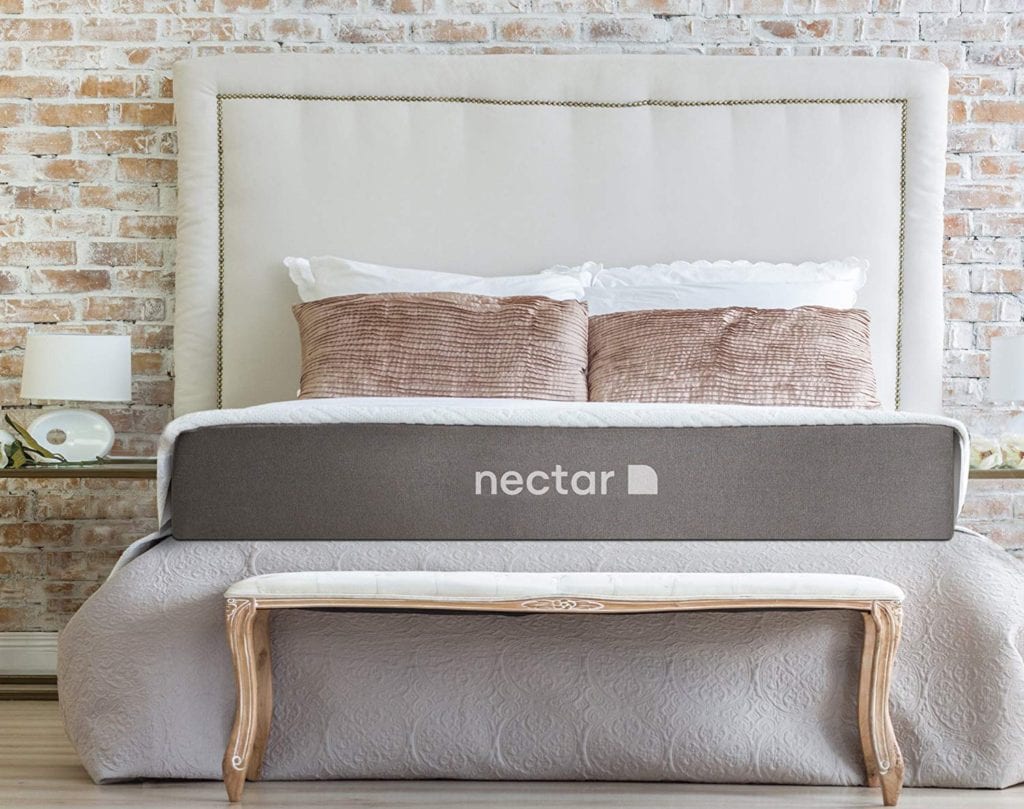 The Company: One of the fastest-rising mattress brands.

The Nectar Mattress was launched on September 30, 2016 and is now one of the leading brands in terms of sales. This rivals the rise of Casper Sleep, which entered the bedding market in 2014.

The Nectar Mattress was the first offering of DreamCloud Holdings, LLC (DCH) of Palo Alto, California. Its three founders intentionally analyzed market patterns and fashioned their marketing to maximize consumer engagement. They still carry on critical market analysis. About three months later, in January 2018, DreamCloud Holdings launched a mattress under its own name, DreamCloud Mattress, a luxury hybrid model. A month after that, DCH bought another brand, Level Sleep. The Level Mattress is midway in price between the economy model Nectar Mattress and the luxury model DreamCloud. Then, in time for Black Friday 2018, a Nectar Sleep store (Nectar Sleep X Bandbox) was opened in Tyson’s Corner in Northern Virginia. So in a little more than two years, beginning with the Nectar Mattress, the company went from one low-price mattress to three broadly-priced models and a brick-and-mortar presence.

The Nectar Memory Foam Mattress is a low-price product, ranging from $399 for Twin to $899 for King/Cal King. It is an 11” high all-foam memory foam mattress with three or four layers (depending on how you count them). It is sold primarily on two venues, the Nectar Sleep website and Amazon, though now it also can be tested in its Tyson’s Corner Center store, bought, and carried home.

This mattress is low-cost because it is imported from China. Even then, it costs a little more than the 12” Ultima Comfort Memory Foam Mattress by Zinus, a company which has its own manufacturing plants in China.

Nectar Sleep has an exploded image diagram of the construction of its mattress on its website. It describes the materials used, but does not give their thicknesses. Nor are the thicknesses stated on Amazon. This is revealed by independent mattress reviewers who had mattresses to test and inspect.  It has three regular layers, two of which are memory foam, plus a layer of quilted memory foam.

The cover fabric (1) of the Nectar Mattress is a combination of cotton and Tencel. Tencel is designed to wick moisture to both cool the sleeping surface and keep it dry. This cover is quilted to 1” of soft gel-infused memory foam (2). The stated purposes of this are cooling and initial cushioning. A look at the quilted top reveals a diagonal stitching pattern of small squares. Evidently, part of the cooling effect may be credited to the tight-pattern quilting with thousands of small perforations through the fabric and this layer of memory foam.

The Comfort Layer (3), of the Nectar Mattress, consists of 3-inches of “Lush Foam™” (gel memory foam). Although the density is not given, this is denser than the quilting memory foam. It is less pressure sensitive and more heat sensitive to let the sleeper slowly sink in. Without knowing exactly what the density is, from customer comments it appears to be at least 4.3 lbs.

Nectar Sleep says it is “semi-open,” meaning that it is not fully open-cell foam. Without ventilating perforations, it is hard to see how enough air could filter through for effective cooling. The company offers no specifics on this, but there is a limit to how effective gel can be in cooling memory foam without airflow.

The Transition Layer (4), in the Nectar Mattress, is 1-inch of what they call “Adaptive Hi Core Memory Foam.” This memory foam seems to be at least a 5-lb. density.

The Nectar Mattress’s foundation layer (5) is very firm polyurethane foam, the standard support layer for memory foam mattresses. Though Nectar Sleep does not now specify the firmness of this foam, they had previously listed it’s ILD as 2.2, claiming it to be the densest memory foam mattress base foam on the market. However, in its evaluation of this mattress, Sleep Like the Dead criticized its marketing accuracy, saying that for one thing, the ILD (firmness) is not density. For another thing, even if the company really means density, another manufacturer, Bed-in-a-Box, has mattresses with that same 2.2-lb. density.

Nectar Sleep describes the foundation layer of their mattress as breathable. In their words, “Nectar has an incredibly dense and very breathable base layer. Drawing in fresh air through specially-molded channels, our foam helps you sleep comfortably, night after night.” This sounds good, but one question is, “How does airflow over the top of the foundation layer reach the top of the mattress?” In other words, air has to flow through the Transition Layer and the Comfort Layer to exchange air with the top of the mattress. They do not say how. 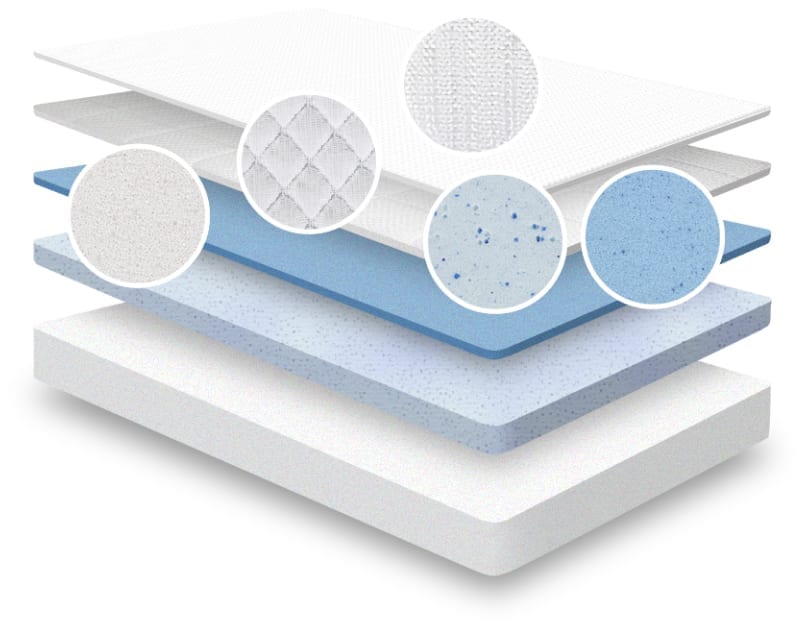 The trial period for the Nectar Mattress is one of the longest – 365 days – the same as for the Spindle Mattress.

The Nectar Mattress warranty – the “Forever Warranty” – is likewise among the longest in the industry. Others offering lifetime warranties on mattresses are Nest Bedding and Layla. The first 10 years are non-prorated replacement. After this is non-prorated unlimited repair or replace.

Though a lifetime (“forever”) warranty sounds good, Sleep Like the Dead rates it as C- and says, “Learn about the pros and cons of Nectar’s warranty.” The major point is that sagging is not covered until it reaches 1½ inches. This is 50% more sagging than for most mattress warranties.

Nectar Sleep, under the DCH division name of Nectar Brand LLC, ran into a legal buzz saw. In March 2018, the Federal Trade Commission (FTC) charged the company with “deceptive/misleading conduct” in regard to country-of-origin claims. According to the FTC complaint, the company’s advertising materials stated that Nectar Mattresses were “Designed and Assembled in USA.” In actuality, the manufacturing, including final assembly and packaging, takes place entirely in China. [This may have been a copywriting error, but if so, why did management not catch it before publication of the materials?] To its credit, Nectar Sleep promptly settled. Neither their site nor their Amazon descriptions say anything about the country of origin, but at least they do not now claim to be U.S.A. made or assembled.

Many shoppers read mattress reviews by independent reviewers, such as Sleepopolis, Mattress Clarity, and Sleep Sherpa. Some of these actually test mattresses they received for testing from the manufacturers, while several others basically report impressions from their own experience in using mattresses. However, there are sites with customer reviews and/or ratings based on what mattress owners have been saying.

Customer reviews of the Nectar Mattress are found on Amazon, Consumer Reports, and GoodBed.

As of May 11, 2019, there were 851 customer reviews (677 by verified customers) of the Nectar Mattress on Amazon. 57% of these were 5-star ratings. The average rating was 3.88 for all reviews and 3.90 for Verified Customer Reviews. Customers also rated their Nectar Mattresses on four sleep issues: Comfort, Sleep quality Value for the money, and Pain relief.

There were only nine Nectar Mattress customer reviews on Consumer Reports. The average rating was 3.33 (66.67%).

On GoodBed, customers can rate their mattresses on any of six issues: Back Support, Pressure Relief, Sleep Quality, Stays “Cool”, Value, and Warranty Service.

The weighted aggregate average rating, taking into account the number of ratings on each site, is 3.34 (66.86%).

Customers giving the Nectar Mattress 5 or 4 stars in their ratings say that they sleep better, sleep longer, and have less pain. Most of them received their mattresses in just a few days. Some said it was the right firmness. At least one admitted to being on the heavy side, and firmer mattresses provide better support for heavier people. On the other hand, a number of 1-star and 2-star reviews said that the Nectar was too firm for them. If they were light-weight or side-sleepers, they would need a not-so-firm mattress for pressure relief.

A few mattress owners complained that it was somewhat hard to change positions, while others said it was easier. This may reflect individual differences in weight and body heat among users.

Among the 1-star and 2-star reviews on Amazon, several said that their mattresses did not open to full height, some opened only to 9½ inches. Some of these noted packing dates on the packages five months or longer before the sale. Manufacturers have said that mattresses should not stay compressed and rolled for more than two or three months to prevent permanent damage to the foam. My guess is that the Chinese plant that made these overproduced, so they were too far ahead of customer ordering.

Some of the customers had no problem with excess heat, while some others d. Cooling of the mattress would be more consistent with a top-to-bottom cooling solution such as in TEMPUR-Pedic’s Breeze models or mattresses by Select-A-Bed that use the Airflow Transfer System.

The Nectar Mattress has rapidly gained a lot of attention and sales for a new start in what is becoming a crowded field. Much of this is credited to low prices and capturing the attention of shoppers in a media-savvy way. However, marketing practices have attracted unwanted attention, and customer reviews reveal what may be issues which come with relying on manufacturing in China.

Admittedly, the Nectar is the entry model of the product lineup for DreamCloud Holdings, which also has a luxury high-end model and a Made-in-the-USA mid-level model. 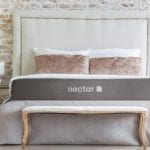