Unreported Sleep Disorders: Risks and Side Effects of Chronic Hypersomnolence 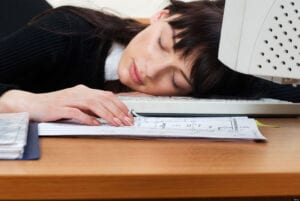 Daytime sleepiness and fatigue are some of the most commonly reported complaints from patients at sleep clinics, according to a study at the Sleep Research and Treatment Center at Pennsylvania State (Vgontzas, Papanicolaou, Bixler: 1997). These issues can stem from a wide range of factors, some of which are increasingly prevalent in our modern lifestyle–back pain and eye strain from sitting staring at a computer all day, blood sugar spikes and crashes caused by processed food, and excess weight can all contribute to this problem. Chronic tiredness has been linked to obesity as well as a host of other medical complications, highlighting a potentially vicious cycle facing many Americans.

The Pennsylvania State study found that TNFα and IL-6, inflammatory cytokines associated with obesity and insulin resistance, might “play a significant role” in sleepiness and fatigue. Numerous studies have linked these elements to obesity and sleep disturbance, suggesting that overweight and obese people may be more likely to be affected by sleepiness and sleep disorders. One team found a significant correlation between inflammatory response chemicals and sleep interruption in children, with the highest levels in obese children, and the lowest in their leaner counterparts.

Conversely, levels of adiponectin, an anti-inflammatory protein hormone associated with decreased risk of heart attack, were lower in obese children and higher in lean children (Tsaoussoglou, Bixler, Calhoun: 2010). While there may be a significant genetic factor in sleep disorders, the link between insulin resistance and inflammatory responses and sleeplessness suggests that weight loss may be a potential solution for some sufferers. 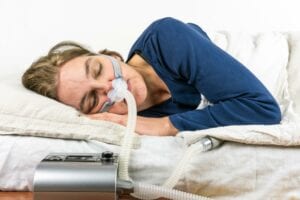 The Department of Preventative Medicine at the University of Wisconsin undertook a study of 602 random women and men, ages 30-60, and found a surprisingly high rate of sleep apnea and hypopnea (a condition that interrupts breathing during sleep)—9 percent in women, and 24 percent in men. Men were more likely to exhibit sleep disorder symptoms than women, and obesity was also a significant factor in levels of sleep apnea and hypopnea (Young, Palta, Dempsey: 1993). This study suggests that the general population may have higher levels of sleep disorders than is commonly thought, meaning that many people suffering from a disorder may go undiagnosed and untreated.

This finding is troubling, because sleep disorders such as sleep apnea can cause more than mere daytime hypersomnolence (excessive sleepiness). Patients with chronic sleep apnea may experience a sudden increase in heart rate and arterial pressure due to abrupt changes in blood oxygen saturation, and may fail to experience the normal decline in arterial pressure present in sleeping individuals. This can lead to conditions such as left ventricular hypertrophy and sustained diurnal hypertension (Weiss, Remsburg, Garpestad: 1996). Hypertension (or high blood pressure) is a condition affecting 24 percent of adults in the US, and can be the cause of many serious medical problems, including blood vessel damage, heart attack, stroke, and brain damage.

Because of these health risks, the high incidence of unreported sleep disorders in the US is a cause of concern for public health experts and medical professionals alike. While there is no reason to assume that all occurrences of daytime sleepiness are disorder-related, persons suffering chronic sleeplessness or sleepiness should be aware of the potential health risks.

Steps that hypersomnolence sufferers can take include paying more attention to their sleeping habits and getting routine checkups for high blood pressure, as well as controlling blood glucose levels. Because obesity is so often linked to chronic tiredness and sleep disorders, overweight people should be especially vigilant for symptoms of hypertension or chronic sleep disturbance.

Other steps include better diet and more consistent exercise, stress reduction, and changing to a mattress that will help allow more restful and deeper sleep patterns.  Memory foam mattresses have been shown to reduce tossing and turning in many sleep studies.  Memory foam also offers the advantage of eliminating motion from one side of the bed to another when your partner moves around, but it should be noted that this will not be as effective in lower quality memory foam mattresses.  A lower quality memory foam mattress will not have a high enough density of memory foam to offer the needed support and will likely have a weaker base layer that will allow too much flex in the mattress.

Those at high risk for sleep apnea, such as men and the obese, should make a special effort to reduce their risk for sleep disruption and the attendant health risks. If you think that you or a loved one may suffer from an unreported sleep disorder, talking to your doctor can be an important first step in heading off serious health consequences down the line.