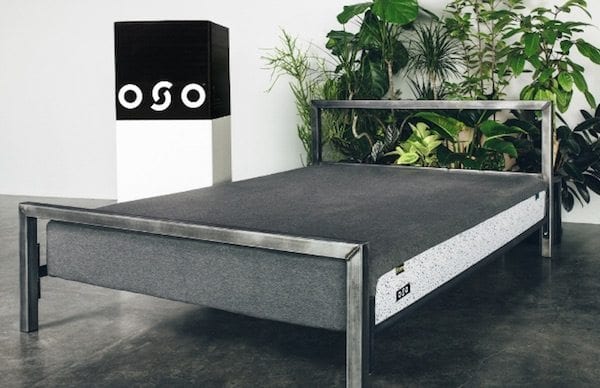 The New Boxable Mattress from an Established Manufacturer

OSO is a boxable mattress put on the market in 2016 by Reverie, an established manufacturer of adjustable beds and mattresses. Startup companies have challenged established mattress manufacturers with their online-only boxed beds shipped rolled up by UPS and FedEx. Now Reverie has joined the establishment in challenging the startups in their own game by introducing their own DreamCell innovation as the key component of their mattress-in-a-box. And they gave OSO its own website.

Reverie’s main office is in Bloomfield Hills, Michigan. It was started in 2002 in Silver Creek, New York. It now has offices and facilities in three states: Manufacturing and Wholesale Sales in Eden, New York; Service, Warranty and Repair in Silver Creek; and manufacturing plants in Michigan, New York and Massachusetts.

Reverie began by manufacturing adjustable beds, having them made in China. Then it switched production to the United States. Originally, this was private label manufacturing. Now they sell them under their own name. Many mattress manufacturers sell Reverie adjustable beds.

A few years ago, Reverie began making their own mattresses to pair with their adjustable bases. But these were not the standard innerspring, memory foam, or latex mattresses. Reverie devised their own support system for foam mattresses – not a foam slab. Independently of Dormeo Octaspring, they developed foam springs. These are not memory foam, as those of Dormeo, but latex (otherwise known as foam rubber), which they call DreamCells.

Reverie’s DreamCell foam springs are latex foam cylinders with hollow cores – not exact cylinders, but with an indentation around the middle and a slight taper to the ends. These are made in four firmnesses, each with its own pastel color: Extra Soft (pink), Soft (blue), Medium (green), and Firm (yellow). It is the selection and arrangement of these that determines the overall firmness and zoning of the Reverie mattress. 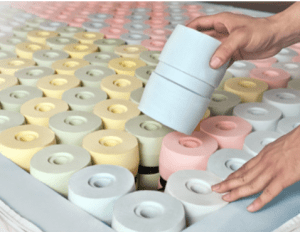 OSO is designed to give the users a choice of comfort level. The DreamCells are in the middle of one half of the mattress. The owners can change the firmness between Soft or Firm by rotating the mattress 180º, switching which half has the DreamCells. This is more choice than in the Casper Mattress, which is a latex-memory foam hybrid with the latex on top. The Reverie Dream Mattress has several firmnesses to choose from, but at a higher cost. 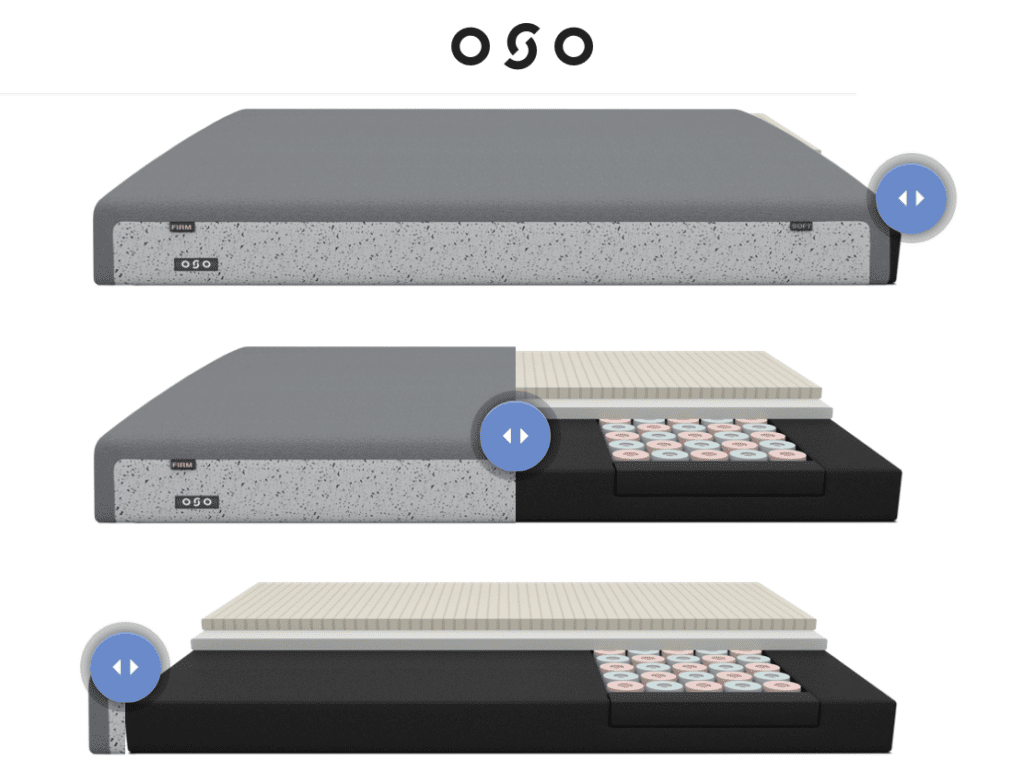 The top layer of the OSO Mattress is 1½” of organic Talalay latex. Latex is resilient. It also yields to the sleeper’s body without having to first warm up, unlike 5-lb. memory foam. The latex is also ventilated to let air freely flow through for cooling.

Next is 1½” of 2-lb. foam, called RevTech™ by Reverie. They call this the Float Layer. It is promoted as being breathable.

Reverie puts 6” of 2-lb. RevTech™ Foam in the base layer for underlying support.

The grey waterfall cover is knit in South Carolina from USA made fibers, and is zippered so it can be removed and dry cleaned.

Certifications the OSO Mattress has received for its materials are the Quality and Performance Mark by Intertek, Oeko-Tex Standard 100, and CertiPUR-US.

The OSO Mattress is compressed, sealed, rolled and packed into a box for shipping by UPS. Shipping is free in the contiguous 48 states of the US. They do ship internationally with charges for shipping, taxes and customs. They will compute the costs before finalizing the order.

Reverie has a 101 night sleep trial for the OSO Mattress. It is also covered by a 10-year warranty.

Still relatively new, the OSO Mattress has had a good customer response so far, which is likely the product of being designed and made by a company whose innovative mattress design has been well-received.

On its website, OSO Sleep announces, “COMING SOON: CUSTOMIZABILITY FOR COUPLES. They want firm, you want soft? No problem! Be the first to experience OSO custom comfort.”

The breathability of the Talalay latex top layer is evident from the vertical ventilation. The means of breathability for the RevTech™ Foam in the Float Layer is not shown or described. Most users have not reported a problem with heat. If this mattress had memory foam, then it would have needed a more efficient cooling means, such as the Airflow Transfer System to move air through as shown in this video.

Reverie does not consider the competition for the OSO Mattress to be Leesa and Casper, but luxury brands such as Starbucks. The price for the Queen size OSO is $925, more than for most of the boxed mattresses. Besides on its own site, the OSO Mattress is sold on Amazon.