Gel in Memory Foam: How effective is it? 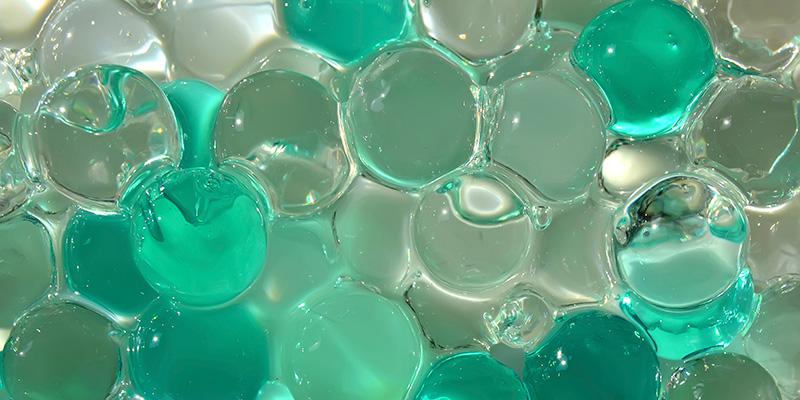 Gel can be described as a semi-solid.

Gel has properties of both solids and liquids. According to Wikipedia, “A gel is a solid jelly-like material that can have properties ranging from soft and weak to hard and tough.” A more technical description is a liquid with a cross-linked network. It is sort of like a saturated sponge with microscopic cells.

The term gel was coined by Thomas Graham, a Scottish chemist in the 1800s. He took the first three letters of gelatine to name substances with similar properties. Just think of Jell-O (or any other flavored gelatin dessert). How firm it is at room temperature depends on (1) how much water is in it, and (2) how warm or cool the room is. A more accurate demonstration can be had by mixing up, setting and comparing separate batches of Knox Gelatine with different amounts of water.

Memory foam infused with gel was put on the market in 2006. Gel infusion was developed and patented by Peterson Chemical Technology. Since then, this materials technology has been used by most manufacturers of memory foam mattresses. For most of these, this is only part of their portfolio of memory foam products. But there are some companies with gel memory foam in every model that has memory foam.

Why Is Gel Added to Memory Foam?

Gel was first used for three functions: cooling by heat absorption and dissipation, quicker (springy) recovery, and a softer feel. All three benefits come from the fluidic properties of gel. Liquid absorbs and conducts heat. Liquid is non-compressible, providing constant support. Fluid flows/deforms under pressure, conforming to the shape and weight of a body. Since memory foam, especially the original closed-cell variety, has a tendency to trap heat, the cooling effect of gel became the most marketed property. However, there are a few mattress manufacturers who cite only the supportive effects of the gel.

Besides memory foam, gel is now added to polyurethane foam and latex. A few fabrics are also coated or infused with gel, almost always for cooling, though here it would have to be a very thick gel, which would take away the fabric’s ability to breathe. It is a poor choice for infusing into batted or loose fiber, since it cannot be held in place and would generally leak out.

Various methods are used to infuse memory foam with gel. The most common is to use beads, which are capsules filled with gel. Other methods are mixing the gel with the foam’s ingredients and swirling liquid gel into the not yet set foam. A more recent method has gel added to the top portion of the memory foam, so that it is a stratified memory foam layer.

How Effectively Does Gel Work?

The effectiveness of gel, whatever the method of infusion, has been challenged. Basically, the advertised claims of cooling are called into question.

Dr. Rick Swartzburg is one who questions the use of gel. He says, “The problem with gel is that it is a conductive substance that responds to the environment around it. This makes it great for those who want to temporarily cool off when getting into bed.”

Savvy Rest, a maker of latex mattresses, is already critical of memory foam, including with gel. Writing in their blog, Laura says, “These materials haven’t been tested or reviewed over a long period of time, so not only the content but the long-term performance of gel-infused mattresses or toppers is unknown.”

Another Savvy Rest blog post says, “It should be noted that health effects associated with gel mattresses have not been studied, and that the added “cooling chemicals” may pose unknown risks.”

The review site What’s the Best Bed (an affiliate of Amerisleep) says, “Gel-infused memory foam manufacturers have reported their mattresses sleep cooler than traditional, although these claims have been contested and disproven by Tempurpedic (traditional)  and Cargill (plant-based). The gel technology relies on ambient heat being passed through the gel to other portions of the mattress, which may be slightly beneficial initially. However, it seems as though the gel eventually warms to body heat.”

Some sources cite the findings of Sleep Like the Dead when it comes to the effectiveness of gel in memory foam, as well as the perceived need. In their review of heat retention, they noted, “Many memory foam mattresses use memory foam infused with millions of gel beads. This gel-infused foam is designed to sleep cooler longer than regular memory foam. Owner experience data shows it to reduce heat-trap complaints significantly for all memory foam densities – by as much as 30%. Nevertheless, about 6% of gel memory foam bed owners still find gel-infused foam to sleep hot.”  Only 12% of memory foam mattress owners complained about sleeping hot. That’s only one out of eight.

Initial gel cooling cannot be denied. Leave a hot/cold gel pack out at room temperature for several hours. Unless the room it was in is very hot (such as in the kitchen with the oven on), it feels cool when you place your hand on it. Now sit on it or lie on it for an hour or two, and the gel pack will be warm. Sitting out, the gel became the same temperature as the room. Your body is warmer, so the gel absorbed its heat until it could absorb no more.

The same is true for gel in mattress foam. It is cool at first, but your body is warmer. Then, as you lie on the bed, it absorbs your body heat – that is until it can absorb no more. In this regard, it seems that the more gel there is, the longer it can cool.

Gel is also a conductor of heat. The effectiveness of gel may be increased if the heat can be conducted to a place where it can dissipate. But if the foam with gel lies on another layer of foam, the heat may be trapped and build up, ending the cooling.

Are there Problems with Gel?

There are some problems with infused gel. Beads can separate from and migrate through the memory foam. Some manufacturers capitalized on this by claiming that the gel beads migrated to where they were most needed. We have seen no proof of this, and the claim has apparently been dropped. Migrating beads are suspected of breaking down the structure and integrity of the foam, shortening its lifespan. If so, this means with gel the use foam is a tradeoff between cooling and durability.

Some reviewers have reported that even swirled liquid gel can dissociate from the foam and break up, affecting foam integrity.

What about Gel Pads?

Gel pads are used in some models of foam and innerspring mattresses for lumbar support. This is a small portion of the area of the sleeping surface. If heat does build up, the lumbar is an area where it may be welcome to some sleepers, since it can relax sore muscles.

Gel pads (or sheets) that cover the entire top surface of the mattress are touted as both cooling and enhancing support and pressure relief. These may cool longer than gel infusion, since for one thing, there is more gel to absorb the heat. Also, it can conduct the heat to points not in contact with the body to dissipate, though this is somewhat hindered by the sheets and blankets.

On the down side, total gel coverage cuts of airflow, making the mattress less breathable.

Whether or not we want gel-infusion for the benefits of memory foam without the heat, we should be aware that there is more than the hype to consider for the use of gel to cool the mattress.