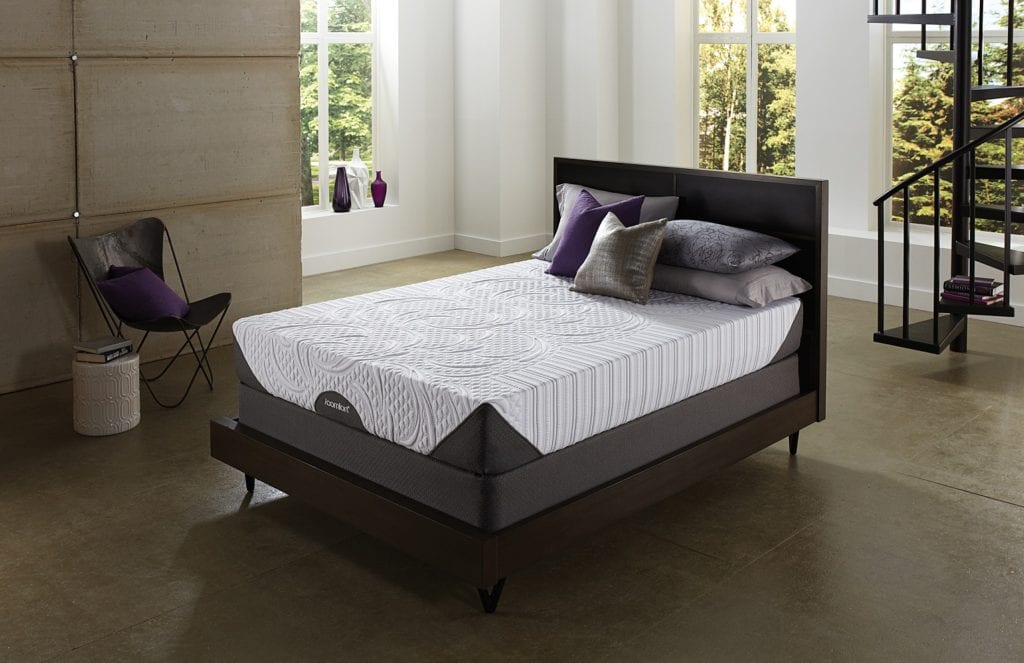 The iComfort® Sleep Systems by Serta®

The iComfort® Sleep Systems by Serta® marks this sleep industry giant’s big push to gain traction in the memory foam mattress arena.  The iComfort uses insightful marketing to address areas of memory foam concern, such as heat buildup and durability.  Unfortunately, the mattress technology has not caught up with the hype.

There are six models in the iComfort sleep line and they all utilize one layer of a MicroSupport™ gel that infuses tiny gel beads in memory foam with the thought that it will provide a cooler experience, along with more support to the body. However, this is where insightful marketing and real life experience can differ.  When Dr. Swartzburg felt the foam, it did not have the high-quality memory foam feel like what would be found on the heavier density, more true-to-form memory foam products.

It seems as though Serta may have also realized that this is the case, since they put a more dense memory foam layer above the gel beaded memory foam layer in their top 3 models and only 1 model out of the 5 models uses the beaded gel memory foam layer on the surface.  This would have been a concern with regards to the cooling effect proposed by Serta, since a layer of memory foam is a denser foam.

However, it is not likely that that much cooling of temperature would come from tiny gel beads that have not been chilled to begin with.  In fact, it should be noted that gel has conductive properties that will actually cause it to heat up more than other types of materials when exposed to a heat source like the body.

With that said, Serta has managed to put together what Dr. Rick Swartzburg believed to be overall nice feeling and fairly good quality mattresses.  However, he also feels that they are not in the same category as Tempur-Pedic and the other high density, traditional-feeling memory foam designs and wouldn’t be expected to offer a much cooler sleep, contrary to the marketing campaign (if heat is a concern with memory foam, see the Tri-Pedic and KoolFlow mattress reviews to learn more about the patented Airflow Transfer System.

Additionally, the iComfort Series uses an edge support that is unnecessary with mattresses that have firmer and more resilient core layers like the Tempur-Pedic and other comparable mattresses, as the more resilient cores will not create an edge weakness.  It should also be noted that the mattress edges are always what holds up the best over time and that added edge supports can deform over time and cause more problems than they were intended to prevent.

The iComfort Ever Feel Prodigy gives more layers to create a model that is thicker, but a bit firmer on the surface than the Revolution. It uses 2 inches of the traditional feeling memory foam, over 2¾ of the beaded memory foam, over 1½ inches of a gel beaded faster reacting polyurethane foam, followed by a final 1 inch of a more supportive polyurethane foam in this 12.5 inch thick mattress.

The iComfort Renewal Refined has now been discontinued in favor of the iComfort Directions series that includes the iComfort Inception, Acumen, Acumen Firm, Reinvention and Epic series.  In the iComfort Epic, it would seem that Serta has attempted to create their answer to the very popular Tempur-Pedic® Cloud-Luxe(nothing like a little friendly competition).  They accomplish this by using their pillow-soft Gfx memory foam layer on the top, and also include a springier gel infused support type foam.

While these newer infused foams will not offer the same feel as the Tempur-Pedic or other premium brand, higher-density memory foam products, it will offer a more soft and luxurious feeling than the previous 5 models.  Serta does not list the density of its memory foam, nor does it list where the foam is made.  Serta also offers a lower profile adjustable bed that will readily accommodate any of the iComfort mattresses.

In 2016 Serta merged the iSeries Collection into the iComfort Collection, which now has two series: iComfort Foam and iComfort Hybrid. The new iComfort Collection now has 8 all-foam models and 20 hybrids. Each of these has one or more layers of Serta’s gel-infused memory foam similar to that described above. It has been somewhat modified, but is still generally the same with the same evaluation.

The basic difference between the iComfort Foam and Hybrid mattresses is the support core very firm support foam in the foam mattresses and Duet Coils (1008 in Queen size) in the hybrids. In customer reviews, the iComfort Hybrid mattresses are rated higher than innerspring mattresses in general, including many other hybrid brands. This may be attributed to the Duet Coils, a coil-in-coil design with a soft initial response and firm underlying support suitable for people of greatly different sizes. However, the conformity of these coils, even with a higher coil count, is not as fine as that of memory foam or latex.

Another concern is the level of underlying support for the memory foam and other foams in the comfort layers. Softer foams need firmer support to keep them from overflexing, which contributes to breakdown of the foam. Most memory foam mattresses have a base support core of extra firm foam. And this is usually placed on a foundation with solid support. The memory foam can work against this and last longer. Pocket coils also need solid support in order to be effective.

A notable feature of the 2016 iComfort lineup is the use of microcoils (called SmartSupport Memory Coil System) in some of the models – three of the Foam models and six of the Hybrid models, all with SmartSupport in the model names.

These 2” high coils are in flexible layers. In each SmartSupport mattress, the micro-coil layer is the next-to-the-bottom comfort layer, with the bottom one being 1” of foam – “soft” foam in the Foam models (F300, F500, F700). Beneath this in each mattress is the support core.

Generally, microcoils have a three-fold role in a mattress. First is conformity for pressure relief. Second is airflow for cooling and ventilation. Third is to enhance the durability of the foam layers above. The effective performance for the first and third roles may depend on the placement of these very small pocket coils. The question is, “How solid is the support for the coil layer?”

The foam layer under the microcoils in the Foam models is soft, and may reduce their effective conformity. This may be offset by it being only 1” thick with extra firm foam underneath.

The foam layer may be firmer (not stated) in the Hybrid models, but this is offset by the flexibility of the support coils, so here the microcoil conformity may be compromised. In both cases, the microcoils might not stabilize the upper foam layers as much as they would with firmer support.

Since Serta is an innovator, constantly developing their mattresses, some issues may be addressed. However, positive airflow has been proven better at cooling than gel infusion. Several manufacturers now stress support rather than cooling in their gel foams, but as Dr. Rick Swartzburg has noted, it changes the feel of the memory foam.