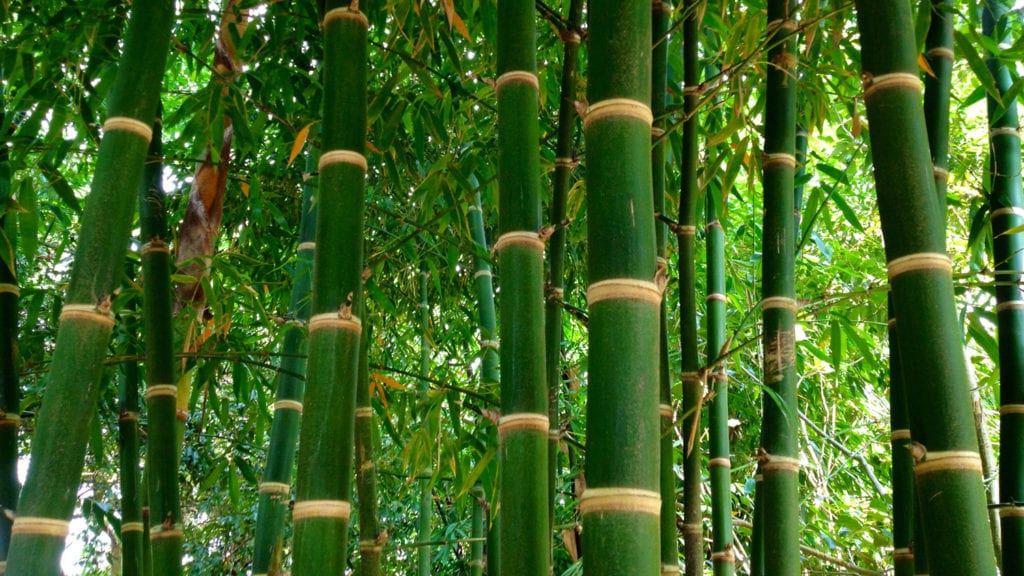 Bamboo, the tallest grasses in the world, some grow to almost 100 feet tall. They are the only grasses found in tree identification books. Bamboo is woody, and is used to build houses, ladders, garden stakes, baskets, hats, ship’s sails, and many more things.

There are more than 1400 species of bamboo, and three groups, two of which are woody bamboo: temperate and tropical. These are the ones used for construction, utensils, clothing, and bedding.

For centuries, bamboo strips have been woven into baskets, mats, screens, writing surfaces, and hats. They have also been used as stiffening for fabric items.

Bamboo bast fibers can be extracted by methods similar to making linen from flax and hemp strands from hemp. The thread and textiles are often called bamboo linen. Most of this is made from Moso bamboo (Phyllostchys edulis), the largest temperate woody bamboo species, which is also the source of edible bamboo shoots. The use of bamboo linen is limited by short inter-nodal fibers from the sections between the joints (nodes), but Moso has longer inter-nodals.  More recently, a new process of making bamboo linen has been developed by Litrax, and used by SwicoFil. Called Natural Bamboo, it can be used as linen worsted.

The advantage of bamboo rayon over regular rayon is in the source of the cellulose. Bamboo has short-cycle sustainability, meaning that a greater amount can be harvested from the same acreage over several years than wood from trees (i.e. a shorter cycle). This is because bamboo grows faster, some species as much as 3 feet a day. Also, clear cutting of a plot does not kill off the bamboo, as it does trees, since like other perennial grasses, it grows from rhizomes that remain in the ground. The rhizomes (grass roots) hold the soil together while new stems sprout without reseeding. This partly offsets the ecological disadvantage of the method of processing rayon, which uses several harsh substances.

Bamboo fiber is found in the covers of several mattresses and pillows. In most, such as the Snuggle-Pedic pillows sold on Amazon, this is bamboo rayon. The reason that bamboo-rayon is used is the silkiness and softness of rayon. Only a very few mattresses have bamboo linen in their covers.

Other Bamboo Products in Bedding

Bamboo charcoal is now found in some mattress foams – polyurethane, memory foam, latex. The charcoal is made by heating Moso bamboo. This follows years of gel infusion, joined by graphite and phase change materials. Gel was originally added to memory foam to enhance support while providing initial cooling. Later, graphite (sometimes called “diamond dust”) was added for cooling, and phase change materials to keep temperatures within a desired range.

The claimed benefits of bamboo charcoal in mattress foam are breathability, moisture control, and cooling, in that order. According to some descriptions, air and moisture follow the strands of bamboo charcoal through the foam. Some claim the charcoal has a filtering/purifying role – this most likely refers to the use of charcoal filters in air purification.

Bamboo joins cotton, linen, and wool as one of the ancient source materials used in modern mattresses in traditional and modern forms.