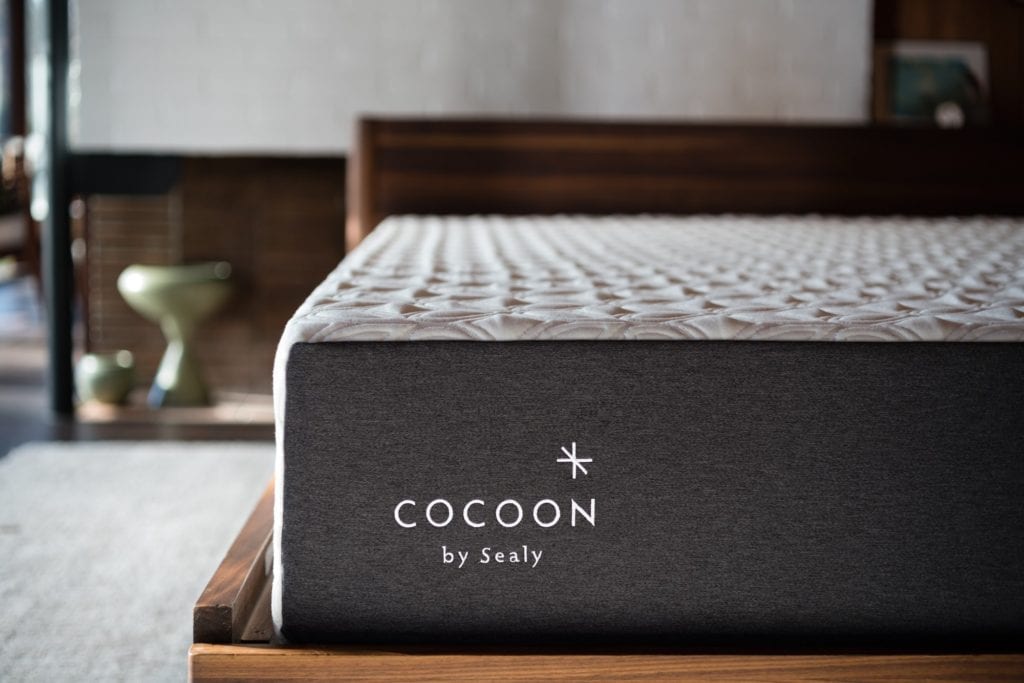 The boxable beds movement that is changing the way mattresses are being marketed started like a developing cloudburst: first one drop followed by a few more, then it began to really rain.

The technology that made this possible (compressing, rolling and vacuum-packing mattresses) was developed by Magniflex (an Italian firm) in 1986. Then 18 years later, in 2004, a new mattress manufacturer in the United States began shipping out mattresses in boxes. They called themselves BedInABox (BIAB) , and that became the term for a boxed mattress – bed-in-a-box. Two years later they began selling only online.

This was followed by Novosbed in Canada (2009), then Tuft & Needle in the United States (2012). But when Casper Sleep in New York City began delivering boxed mattresses by bicycle, it caught the attention of major news media, including the New York Times and the Wall Street Journal, and the movement gained momentum.

This did not escape the notice of the mattress industry establishment, especially the trend to online only sales. With Internet sales displacing in-store shopping for other products, the handwriting was on the wall. Established mattress companies, old and not-so-old, began developing their own boxable mattresses.

Change in the Establishment

Sealy (part of Tempur-Sealy) spent more than a year designing, testing, and refining their own mattress-in-a-box. In March 2016, they unveiled Cocoon by Sealy, an answer to Casper, Yogabed and other boxed bed startups. Ironically, this was the day after “Bed-in-a-Box Startups Challenge Traditional Mattress Makers” appeared in the Wall Street Journal.

How the Cocoon Mattress is Constructed

The 2” high Perfect Fit Memory Foam Layer is 3-lb. memory foam, used for pressure relief. The weight of the foam affects how pressure-sensitive it is as opposed to being heat-sensitive, in other words the balance between relieving pressure and not getting too warm. Perfect Fit is more pressure sensitive than heavier memory foams, meaning that it is softer.

The 2” Comfort Layer is found only in the Soft version of the Cocoon by Sealy. The overall firmness of the mattress is determined by the 2.2-lb. density of the memory foam in this layer, even softer than the 3-lb Perfect Fit memory foam in the top layer.

Sealy calls the foam in the Support Layer of the Cocoon Essential Support Foam. This is what keeps the sleeper from bottoming out. Since there is some give, even with very firm foam, it is not like hitting a board. And it does help the mattress keep its shape. This layer is 6” high in Soft, and 8” high in Firm.

The cover of the Cocoon by Sealy is a stretch-knit material, making it both breathable and conforming. This allows the user to fully experience the benefits of memory foam pressure relief, which is masked by quilting and thick materials.

Gel-Infused Foams For Cooling: The Chill

The Optimum models all feature gel-infused foams for cooling. However, as of now, the Perfect Fit Memory Foam in Cocoon by Sealy is not infused with gel.

Optimum also features Outlast material in the top layers. This is to control temperature. Outlast is a phase change material (PCM) which keeps the temperature within a designated range by absorbing heat when the mattress gets too warm and releasing that heat when it gets too cool.

The Cocoon by Sealy was released with only one model. Now it has two. The original model is Classic, and the new model is Chill. As the name suggests, the Chill is intended to counter the tendency of memory foam to build up heat and sleep hot. How it does this is with a “proprietary” phase change material in the cover fabric. This is the only difference between Chill and Classic.

Three advantages of using PCMs instead of gel are (1) they are more effective than gel, (2) they both cool down and warm up the bed as needed, and (3) since they are in the cover instead of the foam they do not affect the performance of memory foam as gel-infusion does.

Three favorable features of the Cocoon by Sealy are placement of memory foam in the top layer where it is the most effective, using a breathable and conformable stretch knit cover, and offering more than one firmness level.

The conformity of memory foam relieves pressure on large joints while supporting the spine. However, higher density memory foam, which is more conforming because it is more heat-sensitive, can make it hard for a sleeper to move. It can also be very slow to conform when the room temperature is low. Lower density memory foam, which is more pressure-sensitive, would allow the user more freedom of movement while still relieving pressure. The Tri-Pedic mattresses put a layer of 4-lb. memory foam above a 5-lb. layer, getting the best benefit of both. Since the top layer of memory foam in the Cocoon by Sealy is even lighter (3 lb.), it is even less temperature sensitive. Thus it should not accumulate as much heat as the 5-lb. or 4-lb. memory foams. It should also provide some pressure relief, though not as much as the denser memory foams.

Even with lighter memory foam, there is still the question of cooling the mattress, such as in the Classic. Airflow is the most consistently effective means of cooling a mattress, and it also helps keep it fresh. For this reason, open-cell structure is now the standard for memory foam, but as Dr. Rick Swartzburg demonstrates in a video, it only lets a little air filter through the foam. A better flow of air is achieved through numerous vertical pores in the foam. The best result is when the air that flows through the ventilated foam is channeled to the side for an exchange with outside air, such as with Relief-Mart’s Airflow Transfer System. Sealy does not say anything in the Cocoon by Sealy descriptions about airflow.

Overall, judging by customer reviews on Amazon (4.5 stars out of 5), it seems the time spent in development, testing and refinement of the Cocoon is paying off for Sealy as a worthy competitor to the startups, especially with its two models and the choice of firmness.