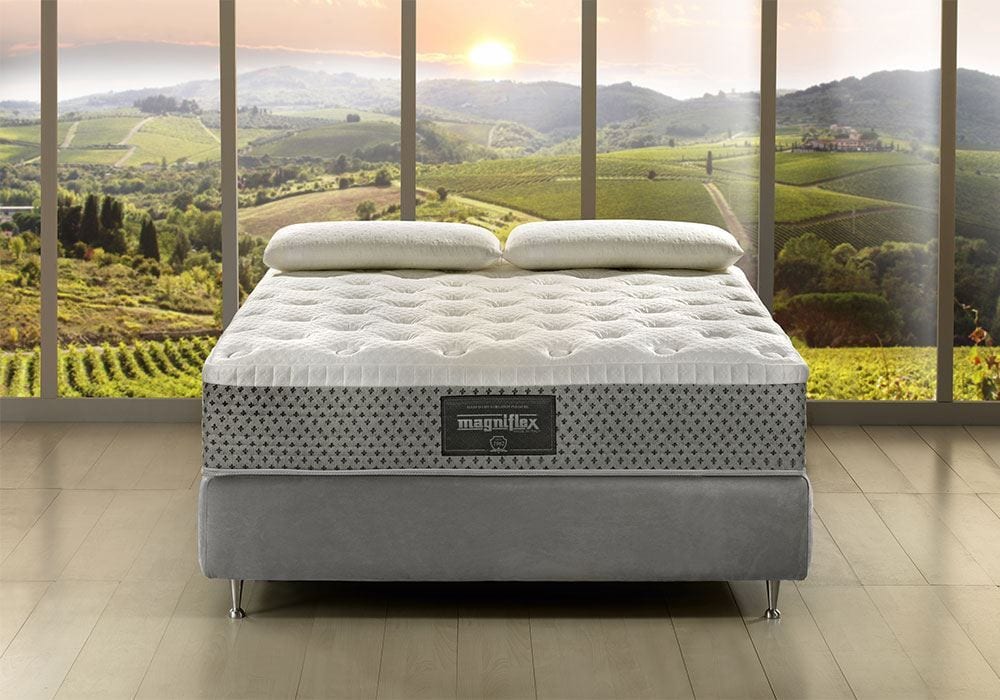 Magniflex was started in the 1960s by Giuliano Magni in Prato, Italy, which is near Florence. He used local fabrics and other natural materials to make sleep products, such as pillows and mattresses. They also sell

beds of the type which are called divans in Great Britain. Several accessories are also dealt by Magniflex.

At some point of time, Magni began using foams, such as polyurethane, for support and cushioning. In 1986, Magniflex developed a system of compressing and vacuum sealing their mattresses, rolled up to fit into a duffel bag, for more efficient shipping.

Following the introduction of memory foam by Fagerdala (now Tempur-Pedic) in 1991, Magniflex began developing their own visco elastic foam and using it in mattresses. Called Memoform, it is used in 17 of the current 25 Magniflex mattresses sold in North America. A higher density version, Memoform HD, is used in three other models (the Virtuoso Collection).

The Toscana Collection is the only one without Memoform or Memoform HD. Three of its four models employ Geomemory, a water-based foam with added plant extracts (such as Soya or Aloe Vera) described as “anatomical” and molding “itself naturally to the contours of the body” in a described manner like that of memory foam. Together with “memory” in the name, this suggests that this is what Magniflex considers to be plant-derived memory foam.

As to memory foam being plant-based, Dr. Rick Swartzburg calls that into question. He says that a foam cannot really have the properties of memory foam with more than 5-10% of soy or other plant oil. One cannot really know if a water-based (as opposed to oil-based) foam can be memory foam without actually testing it in the lab and with sleepers. Another concern is the longevity of alternate foams.

With 23 of the 25 Magniflex models containing one form or another of memory foam, the company’s offerings can be called memory foam mattresses.

The Collections and the Mattresses

Magniflex’s mattress models are ordered into 18 collections. All the models except Virtuoso 9 and Cotton Chic 8 have some type of Magniflex memory foam (Memoform, Memorform HD, Geomemory). The Magniflex mattress collections with their models are as follows:

As would be expected with so many collections, there are a variety of constructions in Magniflex mattresses. In all of the models that have memory foam (Memoform) or its equivalent (Geomemory), that is what is in the top layer, closest to the user. This is good, since the user can fully experience the benefits of the visco-elastic material.

Magniflex states that its foams have open-cell structure. This would allow some air to filter through the foam for ventilation and cooling. The company says that it will “flow freely.” How freely may be questioned, since vertical perforation allows even more air to flow through than with open-cell foam, as Dr. Rick Swartzburg demonstrates in a video.

The Memoform seems to be at least 4 lbs. in density. A number of customer reviews remarked that the mattress seemed too firm at first, then softened and conformed to their bodies. The Memoform HD in Virtuoso models is denser, probably 5 lbs. This would make these memory foams close to the densities of those used in Tri-Pedic and Tempur-Pedic mattresses.

Magnifoam is polyurethane support foam. It has a firmer version (Elioform), and a softer version (Eliosoft). Magnifoam Breeze is the breathable form, with eucalyptus oil added.

Magnigel Foam, according to Magniflex, is a gel foam, not gel-infused foam, although at least one retailer described it as gel memory foam, which could have been by force of habit. There are other foams made of gel, one of the newer ones being Purple Mattress. This gel cools in two ways: absorption of heat and airflow. Being permeable not only regulates temperature, it is supposed to keep the mattress dry. The increased surface area also allows moisture to spread out for evaporation, adding to the cooling effect. Besides cooling, the foam configuration also has support/cushioning properties.

Mallowfoam is foam infused with mallow extract. This is reputed to have anti-inflammatory and calmative properties.

Ecogreen is made with water and essential oils. Magniflex claims that is an orthopedic foam which also breathes. It is not billed as memory foam.

Fibers, plant and animal, are used inside some Magniflex mattresses. A few of these are wool, camel hair, horsehair, cotton, polyester (SuperSoft), and feathers.

Magniflex uses several materials in the covers of its mattresses. Among these are cotton, silk, cashmere, linen, viscose (rayon), satin viscose, and the performance fabrics Outlast and CoolMax.

Not much is said now on the Magniflex about airflow other than open-cell foams and breathable fabrics and fibers and a 3-D border stripe for breathability on the side of the mattress. However, a few years ago mattress descriptions included channels cut into the surface of support cores to direct air to and from the sides, a feature which is part of the Airflow Transfer System patented by Relief-Mart.

Magniflex has an Airyform version of Eliosoft which is used in some of their pillows for breathability.

Magniflex is a mature company with a broad product line designed to meet a variety of needs, even as the mattress compression, sealing and rolling technology it developed is being used by new online only firms that offer only one or two choices.

The 20-year warranty expresses Magniflex’s confidence in the quality and longevity of their mattresses. However, according to some reviewers, warranty terms require a significant amount of maintenance, including frequency of rotating, and these customers did not know how high-maintenance the mattresses were until they were delivered.