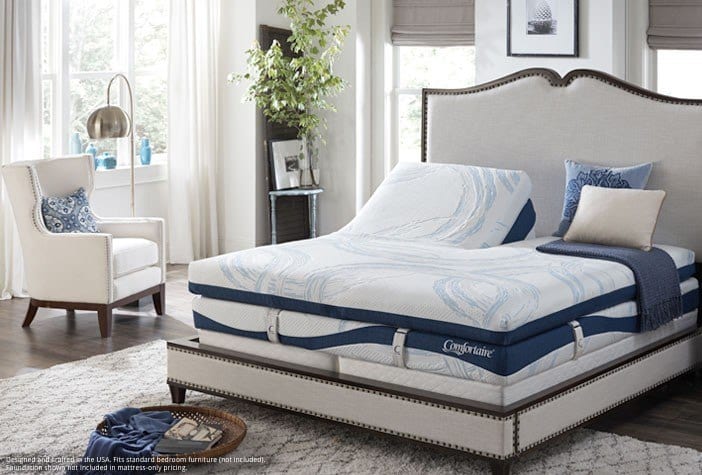 In 1981, waterbeds had been on the mattress market for about a decade. Because of their pressure relief, they were still gaining in popularity, but not for long. A rival to waterbeds’ fluid support hit the market – the adjustable airbed. Instead of liquid providing the evenly-distributed support, it was air. The name of this air bed – Comfortaire.

Comfortaire was established in 1980 by Bob Walker to design, make and sell mattresses with adjustable air support for regular home beds. Pressure relief of fluid support made waterbeds popular through the 1970s. Walker saw the potential of air mattresses to bring this same kind of comfort to the bedroom without the weight and hazard of water leaking with an air bed made for long-time continuous use. This would have the added advantage of pressure adjustment while in use, something that couldn’t be done with waterbeds.

Control of the Air

What made Comfortaire notable was the development and marketing of an airbed designed for permanent use on regular beds. The air pressure could be adjusted by the user with a hand-held remote control. The air pumps were plugged into a room outlet. Walk into a room, and the bed looked like an ordinary one with an innerspring mattress.

Air beds have several advantages over waterbeds. Here are a few:

– Unlike a hard-side waterbed, an adjustable airbed does not have to be in a special frame.
– Airbeds are lighter, even lighter than the later soft-side waterbeds. When filled, a hard-side waterbed cannot be moved. With casters or gliders on the bed frame, an airbed can be pushed anywhere. The mattress can be lifted up. It’s even lighter than an innerspring mattress.
– Dual support: Dating back at least to 1896, an airbed can have different levels of firmness for two sleepers with parallel air chambers.
– Less mess: A leak in a waterbed could be damaging to a room. At worst, a leak in an airbed means loss of support.

Comfortaire’s product lineup has changed over more than three decades, but the selection of airbeds was still the same in 2017 as after their last major revision in 2014, except for dropping the N17. The 2017 collection consisted of four series and nine models:

In the first three series, the model names indicate the heights of the mattresses. An extensive list of past Comfortaire models is found on Beds.org.

The Genesis Series uses what Comfortaire calls their Original Air Technology. All three models use the 6” high air chambers made of 24-ga. latex/cotton. This is rubber reinforced with cotton fibers. This series is represented in the Specialty Comfort Series.

The Waterbed Replacement is the G13 sized to fit into the frame of a hardside waterbed. The RV Mattress is like the G10, but at 9” it is an inch lower, and it also is available in the Short Queen size.

Air chambers in the Nouvelle Series and Ultimate Series mattresses are made of a urethane-based film. These are 2” high in the N11, and 3½” in the others.

Other than separate air chambers for dual air beds, there is no mention of how air is distributed beneath a sleeper. Unless air can be adjusted by zones, as in Air-Pedic mattresses, there is the possibility of hammocking (sagging under the heavy middle section), which throws the spine out of line, especially with side sleepers. This issue is discussed by Dr. Rick Swartzburg on the information page of this site and in reviews of Sleep Number and Air-Pedic beds.

Comfortaire’s descriptions of their mattresses indicate three foams used in their comfort layers. G10, G12, and the RV Mattress use “convoluted foam.” Since the type of foam is not stated, the default for this is polyurethane foam.

The other foams, which are named, are also convoluted. The reason for this could be ventilation to make the mattress cooler, since air chambers are not breathable. It could also be to dampen motion transfer and to enhance pressure relief. However, this does introduce an element of instability, and it could shorten the lifetime of the foams, especially if the projections break, causing the foam to sag at that point.

The comfort layer in U15 is GraPhase Foam. This is CoolFlow™ open-cell memory foam progressively infused, first with gel foam (ThermaGel™), then with graphite. The process is not otherwise disclosed, but the way it is worded seems to indicate layers within the foam, which is possible with today’s technology. The open-cell structure is for breathability, the gel to absorb heat for cooling, and the graphite to conduct heat away for dissipation. How effective gel is has been questioned by some, including Dr. Swartzburg on this site and David Rosenberg of Healthy Foundations.

The addition of graphite is a tacit acknowledgement that gel can only absorb so much heat without a way to shed the heat. Also, open-cell foam lets air essentially filter through. Comfortaire says nothing about vertical ventilation of the foam, but that does not exclude it. A few other manufacturers ventilate their foam without saying so. Ventilation is a key ingredient of the Airflow Transfer System, as demonstrated by Dr. Rick Swartzburg in a video.

The rest of the Comfortaire models have Evellafoam™ comfort layers. Evellafoam is memory foam infused (or blended) with synthetic latex. The latex gives the memory foam a quicker initial response before the foam has warmed up, and a quicker recovery (which is still slower than just latex). Since this blended foam has properties between those of memory foam and latex, it may not please those strongly preferring one or the other.

All foams used in Comfortaire mattresses are certified by CertiPUR-US.

G10, which harkens back to the original Comfortaire bed, is covered by a “soft knit cover,” with no mention of the fibers used. G12, G13, and U11 use bamboo rayon. This is a clarification. Two years before, it was simply called bamboo, but the Federal Trade Commission has managed to get most manufacturers to specify whether these are fibers drawn directly from bamboo, or rayon made from the cellulose in bamboo.

The rest of the models are covered by a soft knit performance fabric with Feran Ice® Technology. This is a hydrophilic treatment of the fibers which is laundry-proof. It wicks moisture away to evaporate, keeping the surface both dry and cool.

Comfortaire does not sell its products online from its website, but in stores across the country. Sleep Number beds are generally sold in Sleep Number Stores, while Comfortaire beds are sold in independent furniture and mattress stores.

Warranties of Comfortaire mattresses are for 25 years. Full coverage is for two years for Genesis Series models, and four years for those in the Nouvelle Series and Ultimate Series.

End of the Brand

In mid-2017, Select Comfort canceled all third-party retailing of Comfortaire beds, other than a few channels. Without online sales, this brings to an end the brand which brought airbeds into America’s bedrooms. The purpose of the remaining channels was to sell existing inventory. The function of the Comfortaire website is now to service warranties, though for the time being it lists the latest models (minus the N11) and their descriptions. Communication with Comfortaire’s customer support in 2018 confirmed that they are no longer making or selling the beds.

The publicly acknowledged reasons for the move are two-fold. First is the cost of replacing or upgrading Comfortaire’s aging facilities in South Carolina. The second is Select Comfort’s focus on the Sleep Number brand, especially the new technology in the 360 Smart Beds (including their remaining memory foam model, i7 Bed).

Having been in business since 1981, Comfortaire has had several customer reviews over the years. Most of those available online are since 2005. Among review sites covering Comfortaire are Viewpoints, GoodBed, and Sleep Like the Dead (SLTD). Since Comfortaire’s outlets were primarily mattress and furniture stores and small chains, there have been no reviews on Amazon. However, following the flow of customer responses through the years shows some patterns.

Comfortaire has 188 ratings and 10 reviews by verified customers on the review site GoodBed. The oldest is from 2010, but some of the customers have had their beds more than 20 years, pushing the dates of manufacture for some back as far as 1985.

GoodBed’s analysis of the reviews calculates an 84% overall owners rating for Comfortaire. This is the GoodBed equivalent of the Owner Satisfaction rate calculated by Sleep Like the Dead. Responses from owners replacing their airbeds yielded an average lifespan of 11.7 years, considerably short of the 25-year warranty. However, prorating the warranty after the second year takes this into account.

Looking at the ratings by customers and their rating on different sets of issues does not seem to come up to the stated 84% owner rate, at least if we just go by the star ratings. The average rating of the 188 average 3.22 of 5 Stars (64.4%), and the average ratings of the 10 reviews is 3.7 (74.4%). What this based on is whether the customers recommend the brand or model they are rating or reviewing. In this respect, GoodBed is close to SLTD. Some of the customer reviews from 2017 complain about warranty service.

The review of Comfortaire by Sleep Like the Dead is based on remarks by 185 owners gleaned from several online sites. Not all of these are actual reviews, but include comments posted in several open sites and evaluated using SLTD’s own criteria and algorithms. According to SLTD, in 2016 Comfortaire had an owner satisfaction rate (OSR) of 81%. In comparison, among the top airbed brands in 2018, Air-Pedic has an 83% OSR, followed by Habitat Furnishings (82%), Boyd Sleep (81%), Personal Comfort (78%), Innomax (78%), and Sleep Number (77%).

What is surprising is how few reviews of Comfortaire are on Viewpoints – only nine. I would have expected more. This may be because most Comfortaire sales were through third party retailers, and more in stores than online. On the other hand, Sleep Number has its own stores all across the country as well as an aggressive advertising campaign. But even with this minimal number, the results are close to those of Sleep Like the Dead and GoodBed, at least within the margin of error for such a small sample.

Seven of the nine reviewers said they would recommend the Comfortaire bed they were reviewing, a 78% recommendation rate. The actual average rating of the beds is 3.8 (76%), a little above the GoodBed average of 74% for 10 written reviews.

On reviews, customers did note several pros and cons about Comfortaire adjustable airbeds.