What Is A Latex Mattress? 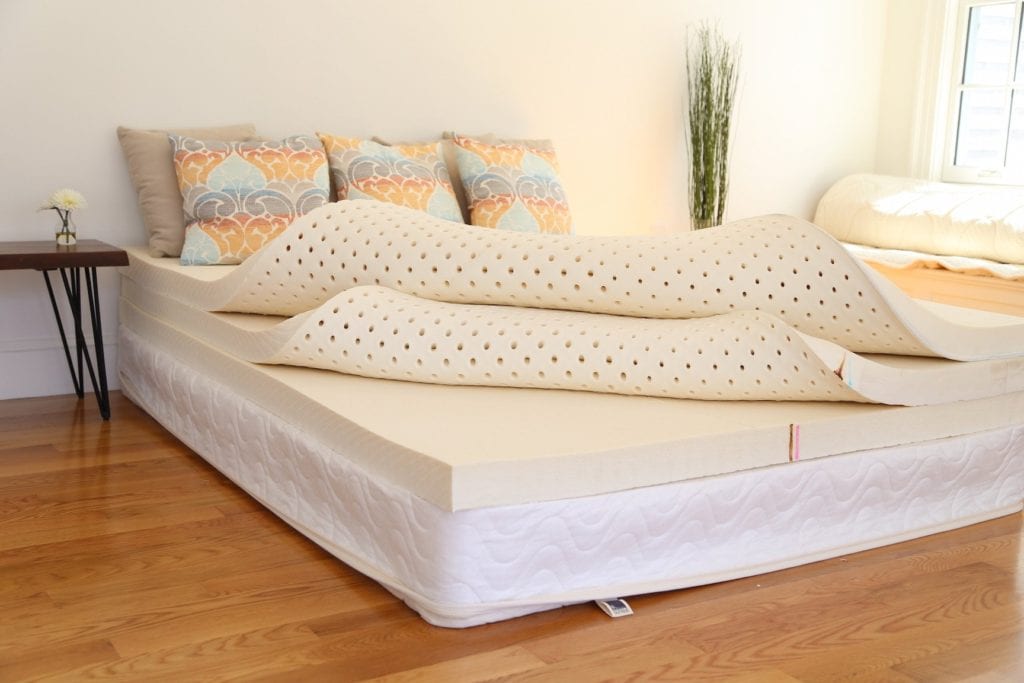 What Is A Latex Mattress?

Latex is a milky liquid produced by many flowering plants when the stems or leaves are cut. Latex is sticky and congeals to seal the wound, keeping the plant from withering. It is common knowledge that latex from milkweed and dandelions is bitter; so is the latex of many other plants. This is because for them it is a defense against being eaten by animals (especially insects).

Latex from some plants, such as dandelions and members of the Hevea genus, contains isoprenes, which naturally polymerize as the latex congeals, forming a water-resistant material. Using heat to dry the latex increases the polymerization. In 1839, Charles Goodyear discovered that adding sulfur while curing latex made the final product more durable. This process is called “vulcanization.”

When the Spanish arrived in Central America (including Southern Mexico), they found the native cultures playing a popular sport with a bouncy ball made of dried latex from the Pará rubber tree (Hevea brasiliensis). A northern variation of the game (played in what is now the United States and Canada) is the forerunner of modern lacrosse.

Not only was latex used for sports, it was also used to waterproof woven fabrics, the origin of rubber-impregnated raincoats and footwear.

Europeans discovered that lumps of latex could erase marks made by pencils and charcoal writing sticks by rubbing them, so it was called “rubber.”

The invention of vulcanization led to many uses for rubber. Demand was greater than Brazil could supply. One reason was the South America leaf blight. The other was the means of collecting the latex, which damaged the trees. But Brazilian plantations guarded their monopoly with the threat of death for taking rubber tree cultivation out of the area.

British agents managed to smuggle H. brasiliensis seeds to England. From there they were sent to tropical and subtropical areas of Asia controlled by Britain, where they were successfully sprouted and grown. From there, rubber tree cultivation spread to the Netherlands East Indies (now Indonesia). Today, South and Southeast Asia produce most of the latex.

Foam rubber was developed in 1929 by the Dunlop Tyre Company in England. This method was the basis of the Dunlop process for latex foam still used today.

The invention of foam rubber was the beginning of the development and use of flexible foams for insulation and cushioning. Now foams made of synthetic latex and polyurethane are commonly used.

100% natural rubber (latex) is the oldest flexible foam produced today. The Dunlop process is still widely used, especially for firmer foams used more for support (as in the support base of a mattress), but the more expensive Talalay process is used for softer latex foam with a more even texture. A few claim that Dunlop latex foam is more natural, but the same ingredients are used. The real guides for use are consistency, texture, feel, and cost, and the real criterion for natural is the liquid rubber tree latex. Organically produced and processed latex may be certified by GOLS.

As to support and cushioning, latex foam can best be described as “bouncy” (resilient). Remember, it used to be called “foam rubber” because it is really rubber cured as a foam.

The firmness of the foam can be controlled by how it is cured. This is done by how much whipped latex is put into the mold (or form for continuous forming), which leaves more head room for expansion of the foam. In the Dunlop process, as it is starting to congeal and cure, the whipped foam is beginning to separate – bigger bubbles rise, and smaller ones sink. This makes the slab of foam less dense (softer) at the top and denser (firmer) at the bottom. For a support core, this has the advantage of a built-in transition to the softer comfort layers above.

In the Talalay process, air is evacuated from the mold, and the foamed latex expands to fill it. Then it is quickly frozen. Later, it is heated to cure the latex into rubber. This means that the density is even all the way through the foam. Using this method, latex can be configured into a wider range of firmness levels, including softer than with Dunlop.

Firm to very firm latex is supportive enough to be used as the support core in a mattress. Softer latex foam can relieve pressure, which is why it is used in mattresses (such as the Fibro-Pedic) designed to help with fibromyalgia.

Synthetic latex was born of necessity. By the time of World War II, rubber had become an absolute necessity, both for commerce and for modern military operations, since it was used for vehicle tires and engine belts and hoses. The supply of natural rubber to northern nations was restricted by war conditions, because the sources were in the tropics. Except for Ceylon (Sri Lanka) and Burma (Myanmar), Japan occupied rubber producing areas of Asia, leaving South America as the only other source available for the United States and Great Britain. South American production was limited, and Germany had no access to either source.

Researchers refined the polymerization of butyl styrene (derived from petroleum) to make artificial rubber. This equipped military vehicles for the conflict. Besides rubber for tires, belts and hoses, synthetic rubber was also used for boots, rainwear and tarps.

After this was synthetic latex foam. One advantage of synthetic latex foam over natural latex, besides the cost, was latex allergies. The allergens are proteins found in natural liquid latex, and any remaining after washing latex foam at the end of the process could trigger allergic reactions in sensitive persons.

At the time synthetic latex foam was introduced in cushions and mattresses, the foam was not sufficiently washed at the end of the Dunlop process to ensure the removal of practically all allergens. When the Talalay process began to be widely used, the foam was more thoroughly rinsed, producing a non-allergenic product. However, latex allergy is a contact allergy, and the latex in a mattress is beneath the fire barrier, the cover, the sheet, and – if used – the mattress protector, reducing the risk of an allergic reaction..

Today, some blended latex foams are mostly natural with a little synthetic latex in the blend. In this case, the synthetic is there to improve durability. On the other hand, there is a current movement among manufacturing and marketing of bedding toward making mattresses as natural as possible. To this group, any blend of latex is unacceptable. One example of this is Nature-Pedic. Barry Cik, the founder, is totally against using polyurethane foam and memory foam, or any material made from petroleum. He is also against natural latex because of a risk (even if very small) of allergic reactions (Nature-Pedic also offers mattresses without wool for the same reason). There are other manufacturers – such as Astrabeds, Savvy Rest and Zenhaven by Saatva – who use only 100% natural latex foam.

Polyurethane foam and memory foam are made using primarily petroleum-based oils. These are prone to offgassing of fumes and volatile organic compounds, which may or may not be toxic. The oils are converted into polyols, which react with isocyanates to expand into foam.

Memory foam is polyurethane foam with other chemicals added to make it more heat sensitive to soften under warmer parts of a sleeper’s body. It is prized for its pressure relief. Some manufacturers have engineered memory foam to make it more resilient like latex, while others (like Essentia) have tried to make latex more like memory foam.

Use in Cushions, Pillows and Mattresses

Latex foam was used in seating cushions soon after its invention. It has been largely replaced in this role by polyurethane foam and memory foam. However, the use of latex in mattresses has increased since the introduction of the memory foam mattress over 25 years ago cut into the market share of innerspring mattresses. Several mattresses use memory foam and latex together. A few of these are the Fibro-Pedic, Casper Mattress, Soft-Pedic, and GhostBed.

There are several latex pillows on the market. These may consist of natural, synthetic, or blended latex. In some the latex is shredded, pieces left from trimming slabs of latex foam to size.

Latex production is generally a sustainable industry, since sustainability practices make better economic sense for the producers. The trunks are tapped for latex in a way that does not permanently damage the trees. When latex production declines after 25-30 years, rubber tree is cut down and replaced. The wood of the tree is used for manufacturing furniture.

Enough people are allergic to one or more of the proteins in natural rubber latex (NRL) that certain business segments avoid using latex products so as to not expose employees with latex allergies. For example, in many industries (such as health care and food service) vinyl has replaced latex in disposable gloves. Most of the latex allergens are removed by washing and/or rinsing in the process of making latex foam, but they remain in many other applications.

In 2001, chemical engineer and entrepreneur Travis Honeycutt founded Vystar Corp. with the mission of producing liquid NRL with virtually no allergens. Vystar scientists and engineers worked on research and development. They had a product in 2007, and worked on manufacturing and distribution by licensing producers. In 2016, Vystar was able to announce the global availability of Vytex® Natural Rubber Latex, an allergy-free latex.

Latex foam made with Vytex is now available to mattress manufacturers. For example, Gold Bond Mattress Company uses Vytex NRL foam in several of its mattresses.

Latex is here to stay, sometimes used alone, sometimes in combination with memory foam, polyurethane foam, or coils. The move to more natural latex has created a greater demand for liquid latex produced on rubber tree plantations. The one caveat for this is the fact that the South America leaf blight is confined to the original habitat for now. But if the pathogens for this blight were taken to current rubber production areas in Asia, it could cripple production. Trees are cloned, which means little genetic diversity, making the plantations more vulnerable to infestations. Future production could be better assured with genetic diversity projects propagating rubber trees from cross pollination to build up a replacement source in case of a devastating blight.