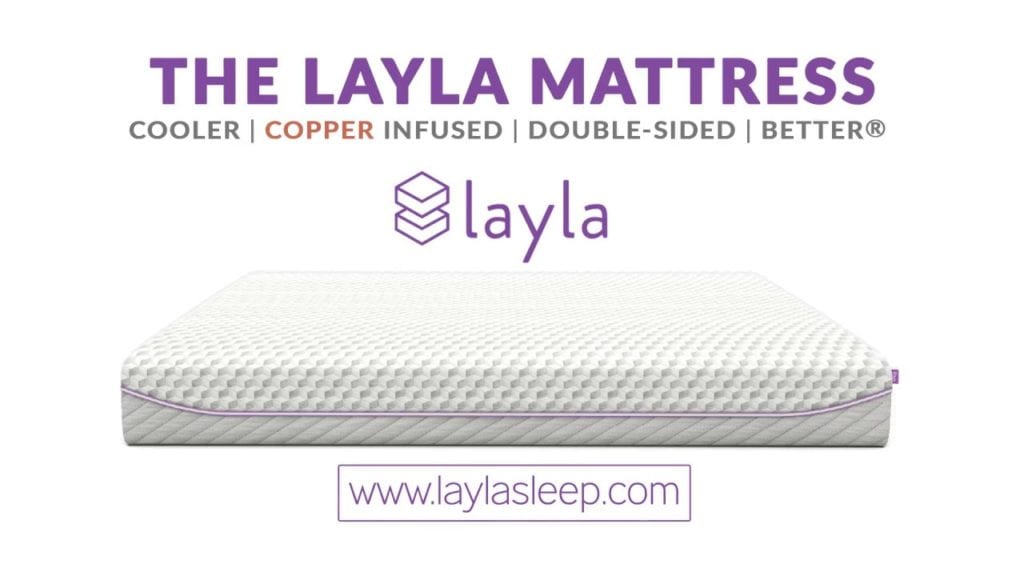 Layla Sleep is described as a “family owned” mattress manufacturer. It is located in Fremont, California, but the manufacturing is in Phoenix, Arizona. It has a Facebook page and a Twitter account (@LaylaSleep). It started in 2015, a year when several other boxable bed companies were beginning.

Layla Sleep’s product is the 10” high Layla Mattress. It is billed as one of the first to have copper-infused foam. Besides the Layla Mattress, Amazon also lists a King Copper Gel Memory Foam Mattress by DreamFoam Bedding.

The use of copper close to the body is in itself nothing new. Ancient societies used copper not only for utensils, pots, and adornment, but for perceived health benefits. The alleged benefits of copper next to the body have received new attention. They may not be to the extent previously believed, but some benefit is suggested in some studies, mostly attributed to electrical fields.

The benefit of copper-infusion cited by Layla Sleep is cooling, because copper is an excellent conductor of heat. The open-cell memory foam is infused with copper to carry heat away from the sleeper for dissipation. On the face of it, it should be more effective than gel, which absorbs heat but is not as conductive as copper.

No mention is made of gel in the memory foam. It does have Thermo-Gel, but not in the foam. This is described as a coating or lining on the cover. Thermo-Gel is also used in the covers of mattresses in the Back Performance Collection by Paramount Sleep. There it is infused into a thin layer of memory foam which is quilted to the cover. Descriptions of the action of Thermo-Gel indicate that it consists of or contains phase change materials (PCMs). This material is also used in action clothing to help the wearer maintain consistent body temperature.

A key selling point for the Layla Mattress is that it is a two-sided mattress, firmer on one side than on the other. If the original side is too soft, flip it over. In this respect, it is the memory foam mattress equivalent of Zenhaven, a latex mattress by Saatva. Firmness can also be selected in the OSO Mattress by Reverie, but by turning the mattress instead of flipping it. There are other mattresses, such as the Spindle Mattress, where the user can change the firmness by rearranging the layers inside. And in a Dream Mattress by Reverie, the user can change or rearrange the Dream Cell foam springs in the support layer.

The Layla Mattress has three layers. The 6” middle layer is high density polyurethane base foam, which is convoluted on one side. On both sides of this are layers of copper memory foam. The “soft” side has 3” of copper foam on the convoluted side of the base. The “Firm” side has 1” of copper foam on the solid side of the base. In Zenhaven, the latex layers on each side are the same thickness, but different densities.

Convolution makes that side less firm and allows air to circulate under the memory foam. Since it is thicker, that memory foam needs more help with cooling. 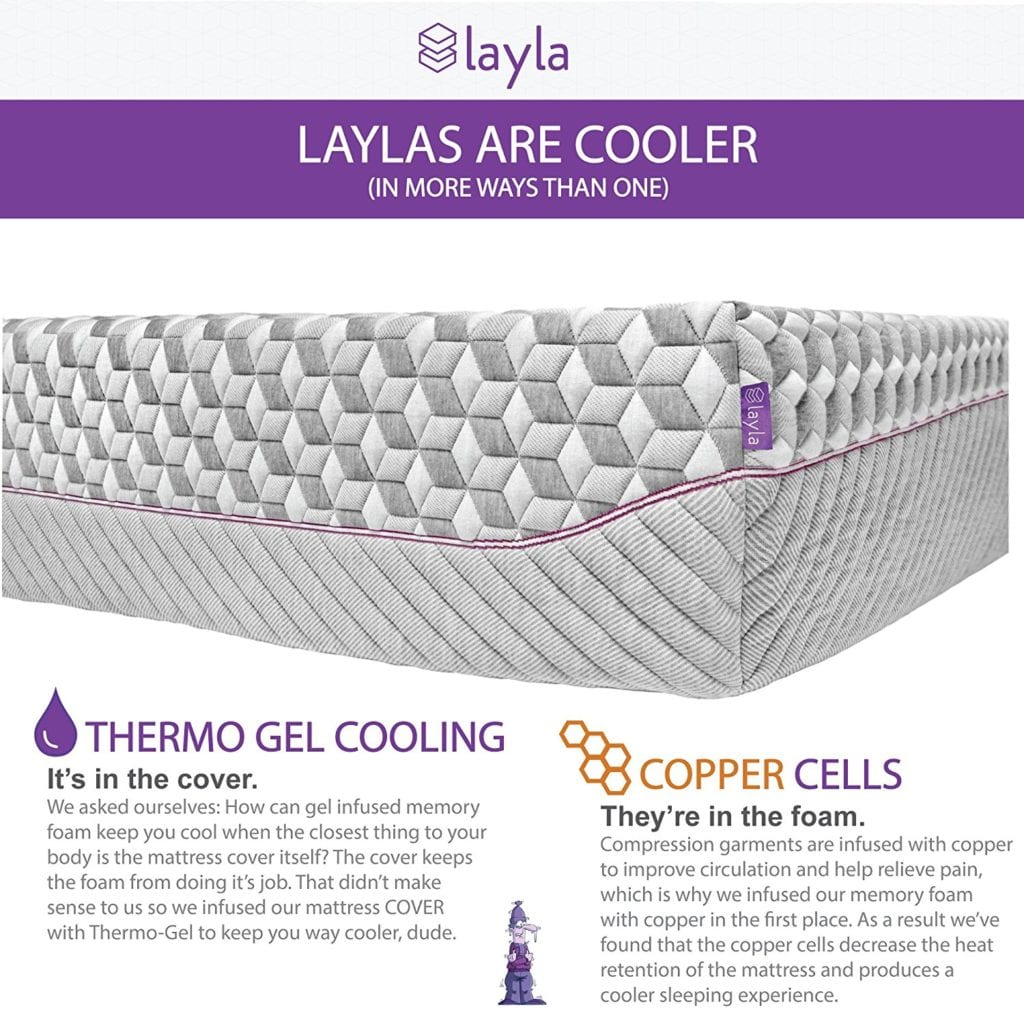 In an early video demonstrating the Layla Mattress, it shows a base layer in the middle plus a thinner convoluted layer. Having one base layer which is convoluted both lowers the cost of production and makes the mattress more stable and durable, as well as making it easier to handle when flipping. 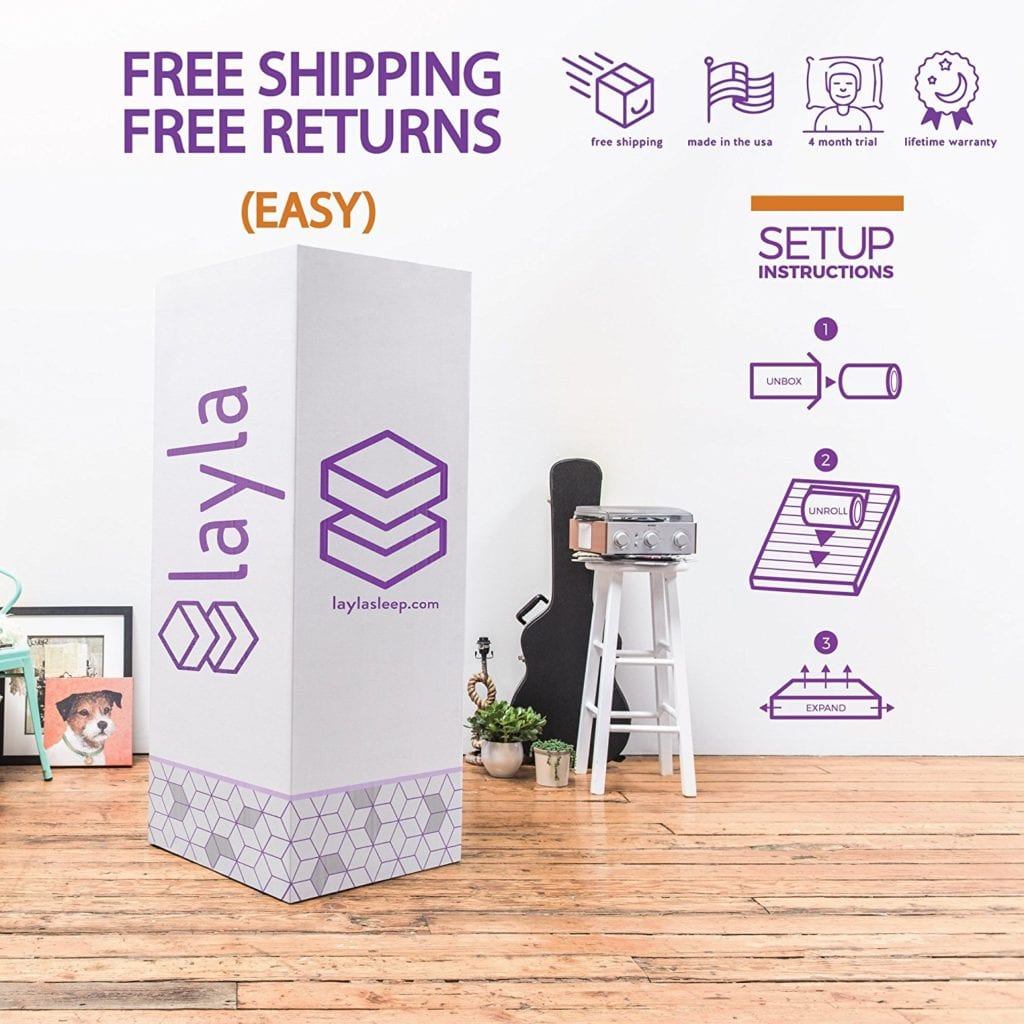 For those in the Midwest who want to first see the Layla Mattress, it is on display in the Sleep Sherpa Showroom in the Minneapolis area.

Layla Sleep has a 120-day sleep trial period. It also has a Lifetime Warranty.

The Layla Mattress is innovative with its combination of copper infusion with Thermo-Gel in the cover and the flip-for-firmness feature. I did not see numbers for the density of the foams, but the demos by independent reviewers indicated it was not too firm, even on the “firm” side. According to Layla, the materials and the mattress are made in the U.S.

On Amazon, the Layla Mattress has a 4.8 star average rating. However, this is with only nine reviews. Eight gave it 5 stars, and one gave it 4. So far this looks good, but a fairer rating will come with over 100 reviews. By then, more users would have had the mattress longer, which would give a better picture of its durability.

As to cooling, the most efficient means is airflow. With open-cell foam, only so much air can pass through the foam. More airflow is had with vertical ventilation (pores in the foam), as shown by Dr. Rick Swartzburg in this video demonstrating the Airflow Transfer System.

With a price on the moderate side of low, the Layla Mattress looks to be a good mattress for the price. As to its actual value, time will tell.