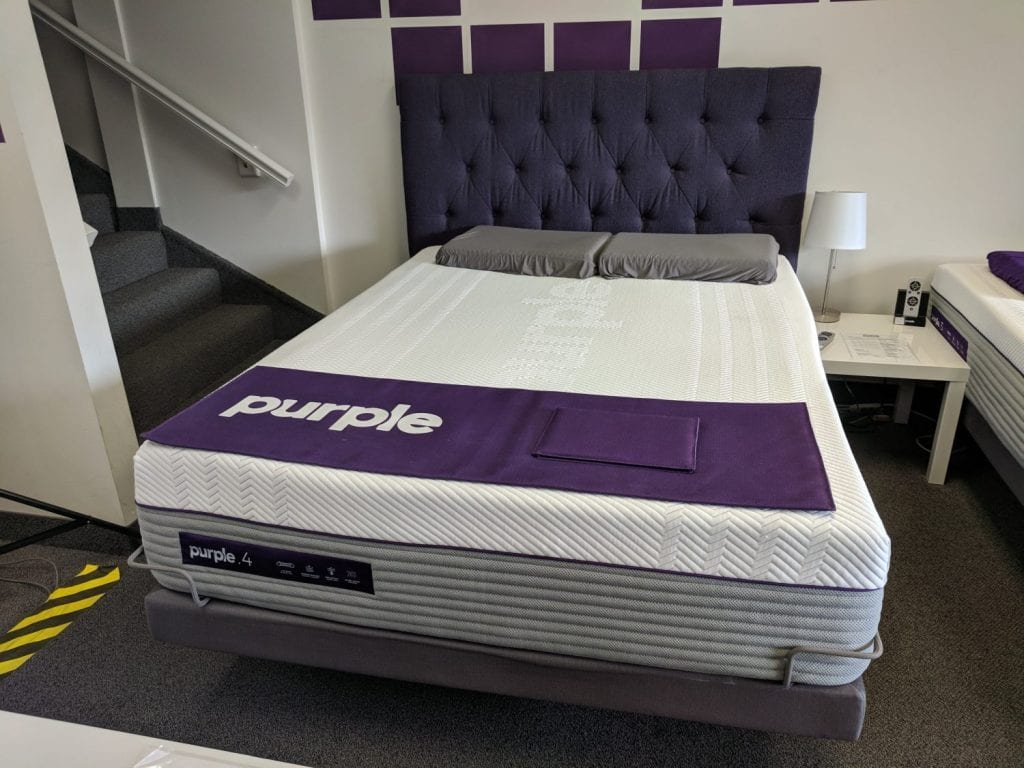 Purple Mattress is a mattress offering introduced in 2015. It has neither memory foam nor latex, but a unique component named Purple. Why is the Purple Mattress being reviewed with memory foam mattresses? Because, though it uses a unique material, it shows similar characteristics and claims the same benefits as memory foam. It is a direct competitor to boxed memory foam mattresses sold only online and delivered factory-direct. It does have some advantages over the others, even though it does cost more.

Purple, the producer of the Purple Mattress, is new and not new. The owners of Purple are two brothers, Tony and Terry Pearce. The company is located in Utah. What’s old about Purple is the partnership of aerospace materials development (Tony) and manufacturing experience (Terry). What is new is the Purple Mattress.

In 1989, the Pearce brothers began working together to help others by making mobility products, such as wheelchairs, with carbon fiber. Then they saw the need for better seating and began making cushions for the wheelchairs. For this they developed a new material they called Floam. This led in the late 1990s to another material called Intelli-Gel and WonderGel. This is a gel-like co-polymer constructed into a 3-D grid that behaves as a foam. It has been widely used for hospital mats, truck seat cushions, shoe insoles, and – yes – wheelchair seat pads.

A further development was a material they called Purple. This is a hyper-elastic polymer. According to the Pearces, Purple is neither gel nor memory foam, but has the behavior and benefits of memory foam with gel. Since it is hyper-elastic, it is the three-dimensional grid structure that provides the viscous property. This was used for the same things as was the WonderGel. What is Purple made of? Food-grade materials.

From Cushions to Mattresses

Now the brothers wanted to use Purple for mattresses. The problem was scale. To be effective, it needed to be made in one piece the size of a mattress. In 2012, they began developing a machine that could produce mattress-sized slabs of Purple. They also configured the construction of the mattress. This accounts for the fact that they have only three available sizes: Twin XL, Queen and King.

In 2015, Purple was ready to unveil the Purple Mattress. This is a three-layer bed. The top comfort layer is 2” of Purple. The middle transition layer is 3½” of firm polyurethane, while the bottom base (support) layer is 4” of extra firm polyurethane. The company claims that it automatically adjusts to both light and heavy people. Illustrations on their site show it conforming to both back sleepers and side sleepers.

Reviews of the Purple Mattress by those who have tried it say that it does provide pressure relief similar to memory foam, but with freedom of movement as with latex. But a noted advantage over both memory foam and latex is breathability. This is due to the “Smart Comfort Grid” design which lets more air circulate. The open spaces in the grid are notably larger than ventilation pores in foam.

However, a close examination of the Purple material suggests that much of the air is trapped in vertical columns. Cross-sections and descriptions do not show or mention ways for the air to flow out from the bottom of the Purple layer for an exchange with room air. Though it is cooler than memory foam that relies only on open-cell structure, airflow could be enhanced with channeling, such as is used in the Airflow Transfer System, which is an option for Tri-Pedic mattresses by Selectabed and a standard feature on TempFlow models and the new Snuggle-Pedic Mattress.