Studio Mattresses by Simmons Beautyrest are sold through Walmart. There are four models under the Beautyrest Studio label, named by their heights: Studio 6, Studio 10, Studio 11, and Studio 12.5. The first one is an all-foam mattress, the other three are pocketed coil models. Not all have memory foam. Two or three of these are boxed for shipment.

Studio 6 may be an all-foam mattress, but the listing does not name memory foam as a component. Of the four models, it has the second highest rating by customers, 4.2 stars with over 150 reviews. It is a rather firm bed, too firm for some users. It comes in only two sizes, Twin and Queen, with Queen costing just about $300.

No mention is made in the description of layers, but it is not flippable, so it may have a thin, softer foam over the very firm support base. Since it is not memory foam, it cannot be judged on its conformity. The cover is removable and washable. It is shipped in a box (this was not mentioned in the description, but in the reviews).

Studio 10 has the least favorable user ratings of the four Beautyrest Studio models, 3.5 stars with 45 reviews. The only internal component named is the core of pocketed coils. It does have some foam padding, but the thickness and composition is not disclosed. More than likely it is not memory foam, since that would have almost certainly been named.

The most cited reason for low ratings in the bad reviews is sagging. This may indicate lower gauge coils or lesser grade spring wire, but in most innerspring mattresses with foam comfort layers, sagging is more often a foam failure.

Although advertised as shipped in a box, some users complained of it being delivered in torn plastic wrapping with soilage of the mattress. This seems to indicate poor handling or sending out returned items.

Studio 11 is a 3-layer mattress with two memory foam layers over the pocketed coil support core. Its user rating is 4.1 stars with only 23 reviews. The reason for so few reviews could be that only one size is currently listed, Twin.

The top layer is gel-infused memory foam. The reason for the gel is not stated; it could be for cooling or support modification. Cooling seems the more likely, considering how thin this layer must be – probably only an inch at the most. Though gel may have some initial cooling as the user gets into bed, over several hours it can absorb enough heat to start getting warm. Better cooling will be had through effective airflow. There is no mention in the description of how breathable the Studio foam layers are, but Beautyrest comfort foams are generally ventilated for airflow.

The second layer is just memory foam. This would serve more as cushioning, since it is thin and the coils themselves would have more conformity. It would, however, grade the conformity a bit more finely. It may be shipped in a box, but that is not stated.

The Studio 12.5 is the highest rated of the four models – 4.3 stars with over 90 reviews. It has an extra layer of padding with a euro top.

The key advertised feature is gel-infused memory foam. The infusion is Simmons’ Microgel, namely smaller beads of gel than they normally use. It also has other, plush foams. Whether any of these is memory foam is not told, neither is which are in the euro top. Cooling is not mentioned in the listing, but this could be a tacit admission of the limitations of gel cooling. Neither is airflow mentioned. But being Beautyrest, the foams likely are vented and the insulators (sheets separating layers) are breathable, so the coils allow air to flow through to the ventilated foam encasement.

Studio 12.5 has the same coil density as Studio 10. It is not shipped in a box as the lower model, so it is probably not compressed and rolled. The price is essentially the same as the 10, so the gauge and metal in the coils is likely the same. This suggests that these coils may be more vulnerable to damage in the roll-packing process, but that is only one possibility.

Edge support is not named in the Studio 10 posting, but that does not mean it is not there. Foam encasement of pocketed coils does protect them, since it keeps them in place. However, unless it is vented, foam encasement blocks airflow, taking away one advantage of an innerspring or pocketed coil support core. 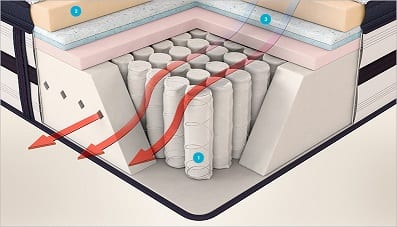 Diagram of Airflow Technology in a Beautyrest Recharge mattress.

Beautyrest has used vented foam encasement of their pocket coils in other models, and there is no reason it is not used here. However, according to Sleep Like The Dead, in spite of the venting of the foams and the edge encasement, Beautyrest mattresses in general have more complaints about heat retention the more foam they have, such as the hybrids. With the lower average profiles of the Studio series, these mattresses should be more like the Simmons Beautysleep, Platinum and Recharge models on this issue with less heat retention than Recharge Hybrid, Platinum Hybrid and Black models.

Better cooling is the result of a direct means of channeling air from under vented foams to the border of the mattress, such as in the Airflow Transfer System (ATS) used in several TempFlow and Snuggle-Pedic mattresses, and it is an option for Selectabed models, such as the Tri-Pedic. As is shown in a video by Dr. Swartzburg, ATS uses channels cut into the base foam to direct air to the breathable border immediately after passing through vents in the memory foam. In the Beautyrest Airflow Technology, the air also has to pass through the insulator, then make its way around the wrapped coils to a single row of perforations in the foam encasement. The longer path to only a single row of vents reduces the effectiveness of the system.

All but the lowest model of Simmons Beautyrest Studio models are pocket coil mattresses. Pocket coils are best known for their conformity. This was the best option for pressure relief for 91 years until the introduction of memory foam in bedding. With memory foam in the comfort layers, the question remains of the better support core, whether coils or foam. According to Dr. Swartzburg, a firm base foam provides more consistent support. Also, it allows the memory foam to do what is supposed to do, and it increases the lifetime of the memory foam.

Considering the lower prices on Walmart, Simmons Beautyrest Studio series mattresses may be worth the cost for customers who prefer the feel of the coils and value the extra conformity without paying the price for regular Beautyrest models. But as with Simmons mattresses in general, the warranty is for only 10 years.