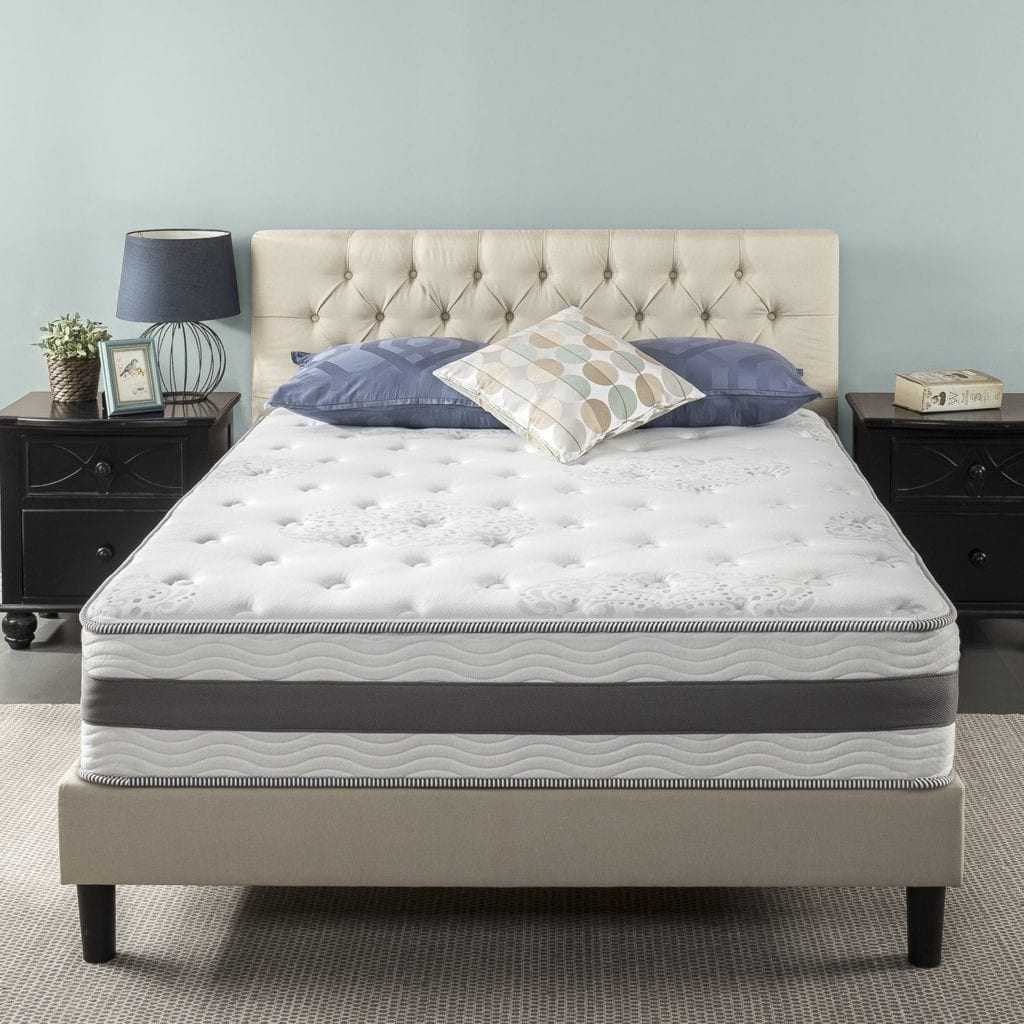 Multiple Brands under One Roof

According to the Better Business Bureau, Zinus started in January 1987 as part of a producer of outdoor products. Reportedly, it was spun off in 2003 as a separate firm making products for “indoor comfort.” Mattresses are only one category of Zinus products. Their website menu lists the product lineup as Mattresses; Beds, Bases & Foundations; Pillows & Toppers; Modern Studio [furniture] Collection.

By now, Zinus is best known for mattresses. However, many consumers do not know that the mattresses they see are Zinus products unless they read the bottom of the ticket. That is because their portfolio encompasses several brands, such as Spa Sensations, Sleep Revolution, Ortho Therapy, Night Therapy, Sleep Master, Spirit Sleep, Slumber 1, Sleep Revolution, Vivon, and Mattress-in-a-Box. They also make mattresses for Keetsa.

These are sold on their website under the Zinus label. These same models are also sold online with Amazon, Walmart, Sam’s Club, and Wayfair, perhaps also a few others. A single model can be found under 3 to 5 brand labels. Some products in other categories are listed on more websites, such as bed frames on Sears.com. The Spa Sensations brand is exclusive to Walmart.

Zinus has three mattress collections:  Memory Foam Mattresses, iCoil Spring Mattresses, Hybrid Mattresses. With 18 current models, Memory Foam is the largest collection. There are 7 iCoil and 5 Hybrid models. All of Zinus mattresses are made in Xiamen, China except one, the Gel Memory Foam 10 Inch Made in USA Liberty Mattress. The mattress heights range from 5 to 14 inches.

Zinus uses several foams in its mattresses. Even the shortest iCoil mattress (Pocketed Spring 6 Inch Classic Mattress) has foam in it – a ½” layer of cushioning above the coils. Not only do models in the Memory Foam Mattresses Collection have memory foam, so do those in the Hybrid Mattresses Collection.

The exact nature of this foam is teased at by the name. Viscolatex Responsive Foam sounds like a cross between latex and memory foam. We are waiting for Zinus’s answer to its composition. This could be modified latex, natural or synthetic, with additives to slow down the response time. This is what Essentia uses instead of memory foam in its mattresses. Or it could be similar to Carpenter’s Avena, a latex foam replacement which is used in the Leesa Sleep mattress.

As the name implies, BioFoam has some plant oils in its formulation. According to Zinus, “The latest evolution of memory foam, Biofoam replaces some of the traditional petroleum with natural plant oils. Zinus is careful to say “some” of the petroleum is replaced. Using information from Zinus, Keetsa says that up to 12% of petroleum can be replaced with natural oils, which is close to what Dr. Swartzburg says on the Memory Foam Mattress Information page: “usually 5-10 % soy can be added to memory foam.” That is not much of a dent in the petroleum. Zinus says it helps with the odor of the foam, especially when including green tea extract.

Green tea extract is added to Zinus foams. The purpose is two-fold: odor control and freshness. Green tea extract is used in other applications as a natural antiseptic on the skin, and an antimicrobial agent in products. Other materials are infused into the foam, such as active charcoal, to absorb moisture.

Many mattresses are still being made with less dense polyfoam in the comfort layers. Sometimes these are alongside memory foam and/or latex. An example of this in a Zinus mattress is a layer of comfort foam, which is usually vertically ventilated to let air flow through.

Also known as visco-elastic foam, memory foam was developed to be self-adjusting cushioning for astronauts’ launch seats in space craft to absorb G-forces at lift-off. Not the original memory foam, almost all current memory foams have an open-cell structure to allow air to filter through. This is to remove heat that the memory foam absorbs from the sleeper’s body.

Some foams are perforated for better airflow. Zinus does not say whether or not their memory foam is perforated. If it were, it would greatly increase the flow of air through the foam, as it is in the Airflow Transfer System by Selectabed. It is demonstrated in this video.

As noted on Sleep Like the Dead (SLTD), Zinus beds use only 3-lb. memory foam. Memory foam this light does not hold up well. This shows up on SLTD’s owner satisfaction results for Zinus memory foam mattresses. This was very much greater for mattresses used for limited adult use of everyday child use (88-91%) than for everyday adult use (70-78%).

Sleep EZ, comparing it to latex, says about memory foam, “12 years on the market, 5 lb density has proven durability, 4 lb second generation has proven durability, 3 lb density will break down very quickly. Being imported from China-very inferior.” This basically agrees with Dr. Rick Swartzburg’s assessment of memory foam which is too light, and that which is made in Asia. 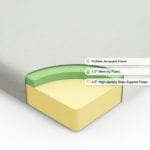 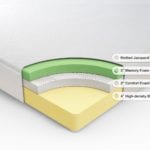 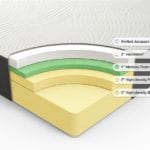 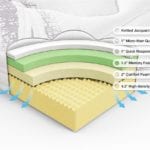 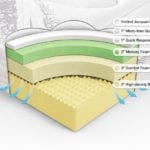 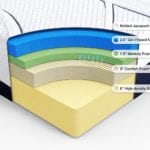 In at least five memory foam mattress models by Zinus, the memory foam is infused with gel. The gel is for initial cooling. Zinus also refers to gel’s semi-fluid support properties.

Effective cooling with gel is short term unless there is an outlet for heat dissipation. Gel is initially cool after sitting for hours, so it quickly absorbs heat when the sleeper lies on it. After a while, the gel has reached the limit of its heat absorption. Then it is warm, unless there is a route for it to conduct the heat away from the user to be released. Here is where positive airflow is more effective. It also makes a difference the form of gel infusion. Swirls of liquid gel are more effective, since they conduct heat more efficiently than beads. If gel foam is ventilated, the flowing air can absorb heat and carry it away.

In most Zinus memory foam mattresses, the height of the support core is less than half the height of the mattress, but more than a third. The memory foam is not always on top, but in some models is the second layer down, especially when Viscolatex is used. Some of the foams are ventilated, while others rely on open cells for airflow.

Zinus uses jacquard knits in its covers. Knit stretches along more than one axis, which makes it conformable with the foams. This ensures that the sleeper can experience the feel of the top foam layer. Knit is naturally breathable, and the knit-in patterns of jacquard give the surface a texture making it more breathable. In some models, this fabric is quilted.

A mattress by Zinus is compressed, sealed, rolled, and packed into a box for easy handling. The box, delivered by FedEx, can be carried or hauled through the house or apartment building to where it will be set up. They are made to order so they do not sit too long in the box. It is recommended to allow 48 hours for the mattress to fully expand and off-gassing to die down.

Zinus mattresses are covered by a 10-year “worry free” limited warranty. There is no specified sleep trial period – this is rolled up into the warranty. According to Sleep Like the Dead and the Better Business Bureau, Zinus has good customer service.

Zinus mattresses appear to be well-designed and constructed. Customers report that they sleep well with great pressure relief when the mattresses are new. However, durability seems to be an issue, with sagging, especially for heavier persons. Reasons for this are (1) memory foam that is too light (3 lb/ft³), (2) foams made in China with not as effective quality control, and (3) infused gel accelerating breakdown of the memory foam.