Essentia, based in Laval, a suburb of Montreal, Quebec, makes latex mattresses. The founder and CEO is Jack Dell’Accio. Mattresses are not the only products made or sold by Essentia. The product line includes Mattresses, Pillows, Kids’ Bedding, and Accessories.

Why latex? To avoid toxic chemicals.

When a relative received a cancer diagnosis,Dell’Accio studied the role of carcinogens. He realized that most mattresses have toxic materials, from noxious volatile organic compounds (VOCs) to chemical fire retardants, which are potential carcinogens. The VOCs are from the process of manufacturing polyurethane foam, and the retardants from meeting US flame resistance requirements. One natural material without VOCs was latex foam, made from hevea milk, a fluid from the rubber tree (Hevea brasiliensis).

Jack’s father, who supplied latex foam to mattress manufacturers, connected him to a latex foam manufacturer in Italy. Dell’Accio researched and experimented. The goal was to make latex foam with the properties of memory foam, but without the toxins. He developed one by adding select organic essential oils to the liquid latex during processing. Back home in Canada, he adapted latex foam making equipment to produce his new foam, which he labeled “Natural Memory Foam.” Then he began making mattresses with this material. By now, Essentia has several variations of latex.

Is It Memory Foam?

Essentia advertises their mattress as the only natural memory foam mattress. But this is a misnomer, as it is not based on the original NASA derived formulation, and it is really just a latex mattress that does have a slower recovery time than the usual bouncy latex designs.

This is an important distinction for customers looking for a true memory foam experience, and it is also important to note for those who suffer with latex allergies, as this particular latex is not the composite type that has been so popular because of its hypo-allergenic nature. In a 2016 interview with Kate Harrison of Forbes, Dell’Acchio said persons sleeping on Essentia mattresses are not exposed to latex allergens (the proteins that trigger allergic reactions).

Essentia currently has eight mattress models in three series listed on its site, ranging from their basic model called the Bionda, starting at $1,524, to their top-of-the-line model called Dormeuse Fior, starting at $4,215. All of the mattresses and latex foam are reportedly made in Canada. These mattresses (with the Twin size prices) are:

The former entry level and top models were Pure and Unity. The current Classic 8 and Energie Opus hearken back to the former models Classic Skinny and Opus One.

All current Essentia mattresses are 8” high, meaning that standard fitted bottom sheets will fit. The firmness and other properties of these eight models are determined by the relative heights and compositions of the layers.

Bionda and Stratami are organic mattresses. Their foams are certified by GOLS as pure organic latex, a distinction not afforded foams (including “natural memory foam”) in the other models. Bionda, the newest model, is a two-sided 3-layer mattress – you can sleep on either side. The 3” outer (comfort) layers are simply described as organic latex. The middle (support) layer is organic Dunlop latex.

The comfort layers are “dome-shaped” on the outer (sleeping) surfaces. These are rounded ridges, designed to increase airflow between the cover and the foam. This is intended to facilitate airflow for cooling. The domed ridges let air flow to the sides. Only testing will show how well this compares to mattresses with Selectabed’s patented Airflow Transfer System.

Essentia also states that this gives the mattress a “pillowtop” feel without wool or cotton fibers. Why? According to Essentia, fiber padding traps dust, dust mites, and other allergens.

The Tatami in the Lifestyle Mattresses and Classic 8 and Energie Opus in the Performance Mattresses have two layers each: a “Natural Memory Foam” comfort layer over a Dunlop latex support layer. The “Natural Memory Foam” in each has a density of 5.25 lbs/ft³. Where the three models differ is height ratios of the comfort and support layers – 1:7 in Tatami, 2:6 in Classic 8, 3:5 in Energie Opus.

Essentia does not use chemical fire retardants to meet U.S. federal flame resistance standards. It does not even use silica-infused rayon. What it does use is a Kevlar® fire sock. Kevlar, used in bullet proof vests, is a fiber related to nylon. Also in this same fiber family is Nomex®, a fireproof material.

Essentia does not use solvent-based adhesives, nor those that release formaldehyde and other toxic fumes when curing. Instead, they use a water-based adhesive made by Simalfa which is certified by GreenGuard Gold. It is free from solvents.

The covers and liners of Essentia mattresses are made of organic cotton. This means no pesticides and no bleaches or toxic dyes.

Essentia sells its products directly from its website and in its stores. There are seven Essentia stores in the United States and five in Canada:

Reviews of Essentia and its mattresses can be found on Essentia’s website, GoodBed, Consumer Reports, Yelp, and Sleep Like the Dead. There are no Essentia mattress reviews on Amazon, since they are not listed that site.

Not surprisingly, the greatest number of reviews (213) are on the Essentia website. Initially, only 3 reviews show when you click of the “Read the Reviews” button. However, gray up (∧) and down (∨) buttons are to the right of these. There are no reviews for models in the Lifestyle Mattresses series, perhaps because these are the newest ones. The average rating for all mattresses is 4.73 (94.55%). The best average rating (5.00) is for the Dormeuse Fior, but with only 5 reviews. Classic 8 (73 reviews) has 4.75, and Dormeuse (53) has 4.74. The least favorable is 4.65 for Energie Opus (31).

Owners of Essentia mattresses have posted 49 ratings (but only 1 review) on GoodBed. Of these, only 15 name the model. Essentia mattresses overall have a 3.12 (62.45%) average rating, and the named models 2.87 (57.33%). However, Goodbed reports that 80% of owners would recommend an Essentia mattress. Also, the ratings of mattress issues (back support, pressure relief, sleep quality, and staying cool) are higher than ratings for the mattresses. This fits in with the general trend of customers giving lower star ratings on GoodBed than on other sites.

Consumer Reports itself rated the all-organic Essentia Stramati as among the best latex mattresses. However, three mattress owners reviewed this model on that site with two 3-star ratings and one 1- star rating.

Yelp has reviews for eight of the Essentia stores, six in the U.S. and two in Canada, with a total of 125 reviews. 40 mattresses were named in these reviews. The average rating of all reviews is 4.22 (84.48%). For mattress models, the average rating is 4.48 (89.5%). These include two 5-star reviews of the Classic Skinny. With Yelp, we must also note that most reviews concern customer service and the shopping experience.

According to Sleep Like the Dead, Essentia mattresses have an 81% owner satisfaction rate. Based on owner remarks on several issues, SLTD gives Essentia a B– grade. They do make this note: “Customer ratings in total on Essentia’s website are at least 20% higher than customer ratings in total at independent sources.” This is not surprising, since some review sites seem to be magnets for negative reviews. But what SLTD noted was the 20% degree of difference.

The weighted aggregate rating for Essentia mattresses is 4.56 stars (91.27%). Converting SLTD’s percentage rate of owner satisfaction to a star rating yields 4.05 stars. Weighting this by the 45 reviews on which SLTD based their ratings yields an aggregate rating of 4.49 (89.81%).

The main pros for Essentia mattresses are sleeps cool, overall support, and pressure relief. However, several customers complain about the support, the same mattress being too firm for some and too soft for others. This includes mattresses tested and bought in stores as well as those purchased online.

Some complain about the initial smell, which has been attributed to the “natural memory foam” (which could be called “memory latex”). Since latex, natural and synthetic, does not emit noxious fumes, so this odor seems to be from the added essential oils – note that these oils undergo changes in the foaming and curing process. 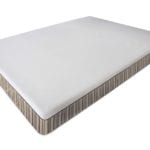