Down vs. Shredded Memory Foam 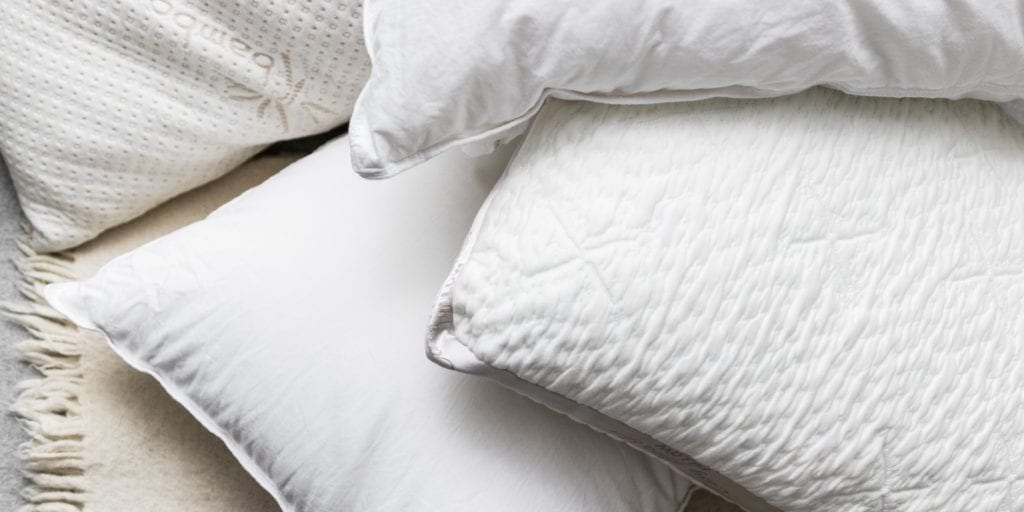 A Comparison of Two Kinds of Pillows

For a long time, at least over a thousand years, the most luxurious, most coveted pillows were those filled with down and/or feathers. By the 20th Century, feather pillows were common. Most of us who grew up before the advent of memory foam mattresses slept on feather pillows, while down pillows were still luxury items.

The Introduction of  Memory Foam

With the introduction of memory foam, foam mattresses began to take market share from waterbeds and innerspring mattresses. Memory foam was used in seat cushions before its use in mattresses. Not long after mattresses, memory foam began appearing in pillows. It took longer to really catch on. For one thing, the original memory foam became hot, and a sleeper’s head is more sensitive to heat build-up than the rest of the body.

Another advantage down and feather pillows had over foam pillows was adjustability. A down pillow can be fluffed up, then shaped to fit the sleeper’s form and position. A cut or molded block of foam was not so easily customized.

Then came shredded memory foam. Foam trimmed off slabs was shredded into tiny pieces. Stuffed into a pillow ticking, this was much softer than a block of memory foam. Shredded memory foam pillows came into the market at least by mid-2013, the time of their earliest customer reviews on Amazon.  Early on, it was seen as an alternative to down.

Shredded Foam or Down?

Which is better? Down or shredded memory foam? Each has its pluses and minuses vis-à-vis the other.

Down is still softer than shredded foam. In fact, there is a real limit to how firm a down pillow can be. Sometimes small contour feathers are added to down for firmness. The blend is firmer than either down or feathers alone. But shredded memory foam can be firmer, either by packing it more tightly into the cover, and/or by starting with firmer foam. Therefore, shredded memory foam has an advantage with sleepers who prefer a firmer pillow.

Another plus for shredded memory foam is that it does not go flat during the night. In fact, it can hold its shape for a long time, not requiring daily fluff-up. This may not sound like a big issue, but it is to those sleepers who wake up in the middle of the night and have to re-fluff the pillow to get back to sleep. This is one of the reasons shredded memory foam is one of the down alternative pillow fillings, a status it shares with polyester fiber fill.

Although shredded memory foam is firmer than down, it still is memory foam. As the sleeper’s head and neck warm the shredded foam, it contours until an equilibrium is reached. The level of this response can be adjusted by selecting the overall density of the foam, while the firmness is adjusted by adding or removing foam.

As an example, Snuggle-Pedic, a Relief-Mart company, fills its pillows with a mix of 4-lb. and 5-lb. regular memory foam (certified by CertiPUR-US) and Biogreen Memory Foam (extremely low in volatile organic compounds). Snuggle-Pedic will customize the blend for the customer, and will adjust the blend during the 120-day sleep trial. This makes the shredded foam in these pillows less or more heat-sensitive, therefore less or more conforming and more or less supportive in addition to being firmer or softer overall.

Benefits of Down Filling

There are several reasons a shopper may prefer down or down & feather pillows to other kinds.

Tradition – Down and feathers are the traditional pillow ingredients. For a long time, it was assumed that the pillow on your bed had feathers and/or down inside. True, there some common pillows were filled with small poultry feathers, which are a lower quality than waterfowl plumage, but more affordable. With the advent of shredded memory foam and shredded latex, down and feathers are now almost exclusively from geese and ducks, raising the overall quality of this type of pillow.

Natural – The attraction of down and feathers for many consumers is that this is a natural material. Add to this the fact that petroleum is the primary raw material for making memory foam, and down is seen as green. Note that a greater percentage of down and feather pillow have cotton or cotton blend covers than memory foam pillows. If polyester fabric is on a down pillow, it is usually in the down-proof liner, though some pillows use tightly-woven cotton liners.

No Chemical Odor – Part of being natural is the absence of off-gassing. Down and feathers do not have volatile organic compounds, the content of most memory foam emissions. If properly cleaned and dried, pillow plumage does not have the strong gamey odor previously associated with this material.

Feel – There are many consumers who prefer the feel of down. These include those who sleep through, even if the pillow goes flat. These users are more likely to be lighter persons who have high-loft pillows with denser down/feather content.

Durability – Unlike diamonds, memory foam is not forever. It does eventually break down and lose elasticity and support. Some commentators estimate the effective lifetime of a memory foam pillow at 3-5 years. However, the durability of memory foam depends largely on its quality. As with memory foam in mattresses, quality varies, with better quality foam made in Europe and the United States.

According to the results, memory foam, feathers, and down score closely in several concerns, with memory foam better in some and down or feathers better in others. Memory foam has the highest owner satisfaction rate (87%) of the eight kinds of pillows in the study, and down (85%) is tied with two others for the second highest rate. Pillows which are all or mostly feathers have the second lowest owner satisfaction rate (82%), 5 points above water pillows (77%), showing the natural preference for down over feathers.

On Amazon, there are several shredded memory pillows with over 1,000 VCRs, while the highest for down and down/feather pillows is 466. On the surface this shows a large consumer preference for memory foam. A number of factors figure into this. First, many consumers are buying pillows to go with memory foam mattresses or innerspring and hybrid mattresses with memory foam top layers or mattress toppers. Second, memory foam pillows in general, and shredded memory foam in particular, are more available than down pillows. One reason for this is the limitation of the market for duck and goose meat, since down and feathers are a byproduct of this industry. Third, the reputation for allergies to down and feathers is greater than the reality. Most allergies are really due to allergenic impurities and dust mites.

The best way to compare the two kinds of pillows is to compare them by manufacturers with weighted ratings. Five manufacturers account for the 22 top-rated down and down-feather pillows with 10+ VCRs. Three of them have six pillows each in this listing, one has three, and the one with the most VCRs has only one.

There are 22 shredded memory foam pillows with 100+ reviews. Three manufacturers (Snuggle-Pedic, Coop Home Goods, Xtreme Comforts) have two pillows each, and 19 have one each. Two more manufacturers have an OVR of 4.6. Coop still has 4.3, joined by four more brands. One more manufacturer joins Xtreme with 4.2. Two each have 4.1 and 4.0, one has 3.9, and two each have 3.7 and 3.5.

Down and Feather Overall Ratings

Computing the average overall ratings for manufacturers of down and feather pillows is simpler. Only five manufacturers have pillows with over 100 reviews. If we take the top-rated down and down/feather pillows with 10+ reviews, we have the same 5 firms. Three of them have 6 pillows on this list, one has 3, and one has 1. East Coast Bedding and DownLite each have a 4.5 OVR. Continental Bedding has 4.4, Royal Bedding 4.3, and Royal Hotel 4.2.

Memory foam and down rate fairly closely on customer ratings on Amazon. The composite OVR for all pillows with over 100 reviews is 4.3 for shredded memory foam pillows and 4.4 for down pillows. Dragging down the composite for shredded memory foam are manufacturers using lesser quality foam, usually made in China and Southeast Asia. While most of the down comes from China, it is a natural product, and the quality is more consistent than with manufactured materials, such as memory foam.

Check out the charts of shredded memory foam and down and feather pillows here.