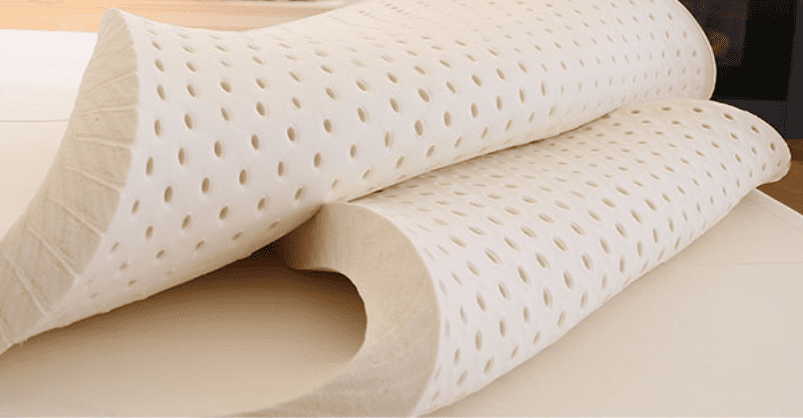 Latex is a milky liquid (“latex” means milk/milky) produced by the rubber tree (Hevea brasiliensis) when the trunk is cut. It is not sap, but is used to seal wounds, keeping harmful pests and infectious agents out, and giving the plant a chance to heal. Dried latex (rubber) is elastomeric, meaning it can be compressed, stretched, or bent, and return to its shape.

Shortages of liquid latex around the beginning of the 20th Century prompted scientists to look for substitutes. During World War I, the first large-scale use of motorized military vehicles, styrene butadiene was developed as a synthetic rubber. It could be processed the same way as natural rubber and used for the same things, especially tires, hoses, and gaskets.

Later, foam rubber (latex foam) was adapted for use in upholstery and mattresses. A natural product from imported raw material, it was a luxury material. Sometime after this, synthetic latex foam became available.

Latex foam has been a desirable material for seating, pillows, and mattresses. Without abuse, it was more resilient and more durable than polyurethane foam. However, there have been objections to the use of latex (especially natural latex). These are or have been environmental issues, allergies, and cost.

Some early objections to the use of natural latex cited the destruction of tropical rainforests and unsustainable cultivation. This seems to no longer be an issue. Rainforests no longer need to be cut down for rubber plantations. Plantation management now uses sustainable practices, including harvesting exhausted rubber trees for furniture wood.

Some persons are allergic to natural latex. Therefore, they avoid natural latex. Some avoid all latex, even synthetic. However, in processing Talalay latex, all or almost all the allergenic proteins are rinsed out. Blended latex (a mix of natural and synthetic) greatly reduces the risk of latex allergies, and synthetic latex eliminates it altogether.

When Is Latex Not Latex?

Chemists can answer this question better than we can. But really, the answer depends on what the definition of “latex” or “rubber” is based on. According to Wikipedia, “A synthetic rubber is any artificial elastomer.” Following this definition, “synthetic rubber” may include not only styrene butadiene, but neoprene, isoprene, polypropylene, and silicone rubber.

A discussion of what is or isn’t latex emerged in response to the use of the term “engineered latex” in mattress descriptions. The concern was that customers would mistake it for real latex.

What Is Engineered Latex?

This is not natural latex made from rubber tree sap, but a synthetic material. Some bedding industry voices object to the term “engineered latex,” saying that this is not styrene butadiene, the standard synthetic latex/rubber, which can be processed into foam by the same Dunlop and Talalay methods used with natural latex sap.

According to these critics, “engineered latex” is really polyurethane foam engineered to have properties like latex. They say that calling it “latex” is misleading. For alternative naming they cite Avena, a latex-like polyurethane made by Carpenter.

The real objection of the critics, then, is in applying “latex” to any type of polyurethane foam. If a manufacturer wants to continue to use the term, perhaps they could add the note that it is a latex replacement foam.

There are several versions of polyurethane foam made to have the properties of latex. Originally, some of these were designed for users who wanted the advantages of latex without risking allergic reactions. They could be called “latex replacement foams.” These include Avena and Energex, as well as a few others.

Developed by Carpenter, a producer of foams and other materials, Avena was developed as an alternative to latex. It is best known for its use in the Leesa Mattress. It is also used in a few other mattresses:

Energex™ is the latex replacement foam developed by Elite Foam. It is described as “a new, energetic alternative to conventional viscoelastic foam that retains all of the advantages of visco without the slow recovery.” It is also an alternative to latex. Elite Foam promotes it as a material having a feel intermediate between memory foam and latex. Several of the mattress manufacturers using it emphasize the latex-like side of its characteristics. Among these users are:

“Engineered Latex” is a term used by at least two manufacturers for latex replacement foam in their mattresses:

There are other foams simply described as being “latex-like” in their performance and feel:

Many mattress customers want the feel of latex, but without the risk of allergies. For others, effective thicknesses of latex – natural, synthetic, or blended – may seem too costly. There are alternatives, but a distinction needs to be made between them and latex in their names and descriptions to avoid confusion.