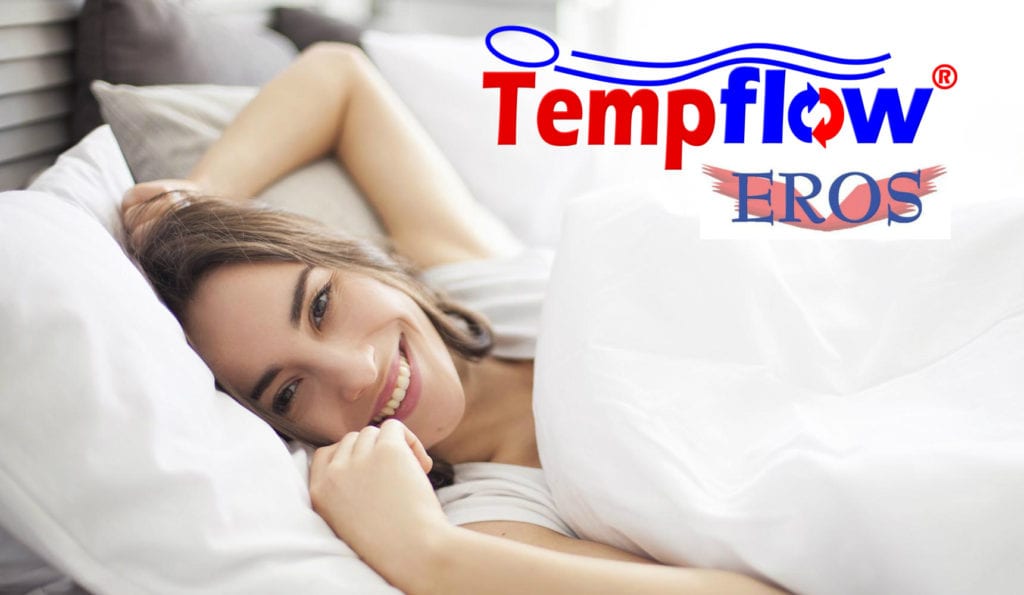 Eros is the second softest of the Tempflow mattresses, being rated as “Plush,” second only to the “Extra Plush” Celestia. It is one of four 11” high models; the others are Celestia, Copia, and Opulence. Eros, as are all Tempflow mattress, is made in the U.S.A. 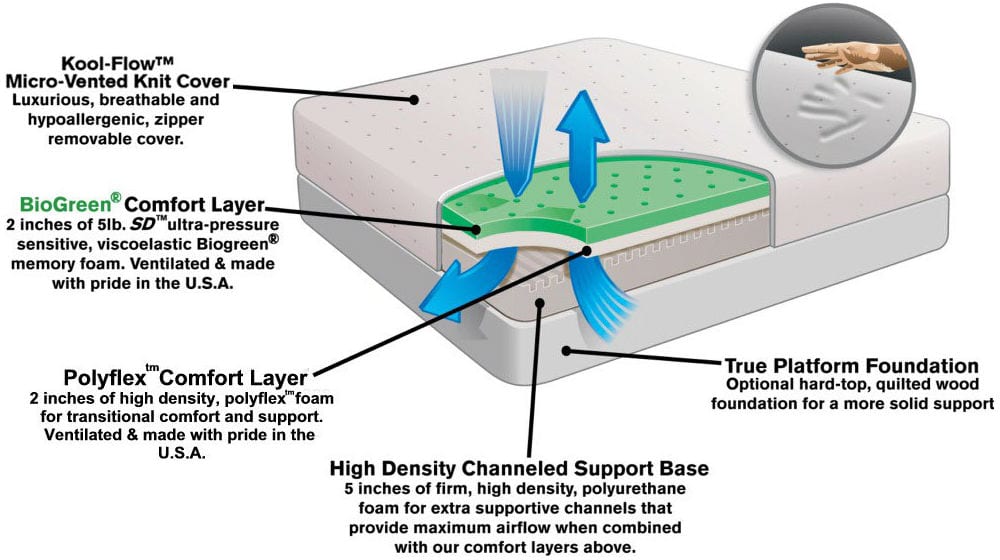 Eros is a memory foam mattress with four layers. The cover and the upper three layers are designed to be part of the patented Airflow Transfer System (ATS). It is also has a graduated layering system, with the layers progressing from softest at the top to firmest at the bottom. This means the sleeper can experience upper level softness without sacrificing support.

The cover of Eros (as of all Tempflow mattresses) is Relief-Mart’s patented Kool-Flow micro-suede and micro-vented knit fabric. This same material is used on the Snuggle-Pedic Mattress and Selectabed mattresses with the ATS option. The micro-vents let more air flow through than with just loose-knit fabric. The micro-vents are not only in the top panel, but on the sides. This cloth is also stretchable, conforming to the sleeper’s body along with the memory foam.

The top layer of Eros is made of 2 inches 5-lb. SD™ Ultra-Plush Biogreen® memory foam. Like the original memory foam developed by Fagerdala (now TEMPUR-Pedic) from the NASA cushioning material, this is a very conforming foam. The primary benefit is evenly-distributed support for pressure relief.

This, the second layer of the Eros mattress, is 2” of firmer 5-lb. Biogreen® for more support. It keeps the upper layer from bottoming out.

This 2″ layer of very firm, HR (high resiliency) polyurethane foam has channels cut into the top surface. These, as part of the Airflow Transfer System, are to transport air to and from the side panels of the cover.

The 5” high Channeled Support Base is extra-firm HR polyurethane foam. 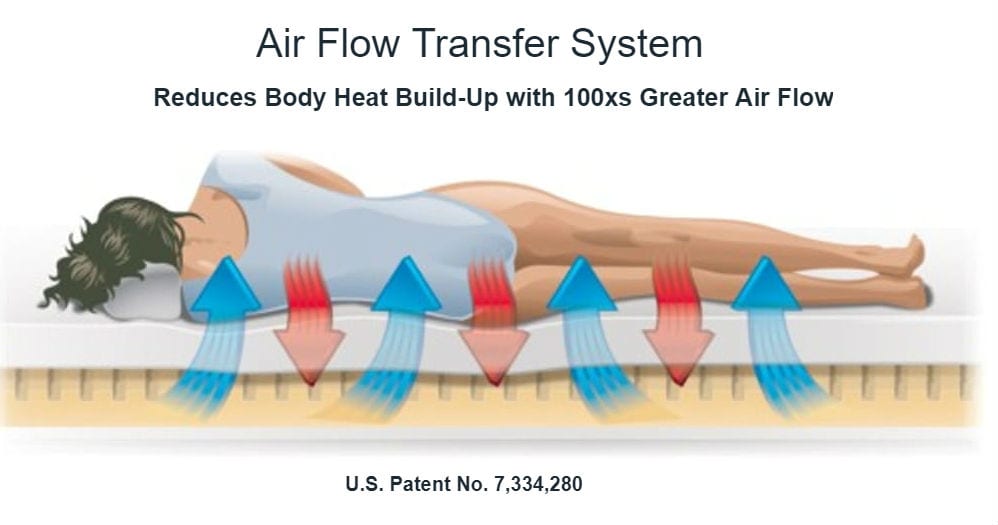 Tempflow gets its name from its use of Selectabed’s patented Airflow Transfer System to move air, and therefore temperatures, through the mattress. As is shown in this Snuggle-Pedic video and a demonstration by Dr. Swartzburg, it moves air in both directions, drawing cool air up to the sleeping surface. This not only cools the mattress, but also keeps the interior of the foam dry and fresh.

How does it do this?

About 2013, Selectabed introduced a new material into Tempflow mattresses: Biogreen®. This is not so-called plant-based foam. but a refinement in manufacturing memory foam. As late as three or four years ago, more than 5% to 10% of soy oil polyols would adversely affect the performance of memory foam, limiting the extent to which effective memory foam could be plant-based.

Biogreen® was developed to significantly lower the level of volatile organic compound (VOC) emissions. In testing by a UL lab, Biogreen® had no toxic materials (such a phthalates), and had VOC emissions of only 00.039 mg/m³. This is ⅕ as much as the strictest standard, GreenGuard Gold, and ¹/₁₃ of the CertiPur-US standard which most mattress manufacturers claim to meet. Some customers reviewing Tempflow mattresses say they do not have the breathing problems and headaches they had with other memory foam mattresses.

Comparison with other Tempur-Pedic Mattresses

Comparisons of Eros and other Tempflow mattresses with equivalent TEMPUR-Pedic models are in flux. The reason is that the older company keeps changing its models and the model names. Admittedly, TEMPUR-Pedic is innovating, trying to stay ahead of the market. It still is the standard to which other memory foam mattresses are compared.

Tempflow mattresses are generally the same. New models have been added over time. Innovation has been applied without totally changing the product lineup. For instance, the memory foam was upgraded to Biogreen® without renaming the models.

Several years ago, Eros was compared to the Tempurpedic® Allura/Grand. Since that mattress has been discontinued, the comparable feel is now like the TEMPUR-Cloud Elite. In 2018, TEMPUR-Pedic has been replacing its models with an entirely new Adapt lineup, so our comparison pairings will have to change, and the Eros will be compared to the new TEMPUR-LuxeAdapt Soft.

So far, Eros has been receiving a positive customer response. There are not many publicly available reviews, because sales of this and other Tempflow models are limited to online at the Tempflow site, in the Selectabed showroom in Agoura Hills, and four dealers, one each in Cyprus and Hawaii, and two in Pennsylvania. GoodBed has 22 customer ratings of Tempflow, but Eros is not named.

However, there are places with reviews of this model. On Beds.org, the highest ranking manufacturer is Tempflow, and Eros is its highest ranking model, a 5.0 average rating with 10 reviews (from Jan. 2013 to July 2018). Of seven mentions of Tempflow in reviews of the Selectabed Relief-Mart store on Yelp, two 5-star reviews name the Eros. Additionally, this model has received good reviews in articles on Space Daily and LA Splash, and some of Tempflow’s customer testimonials name Eros. There are enough reviews, though, to make it notable that not even one is 4-stars or lower. Therefore, we rate the Tempflow Eros with five stars. 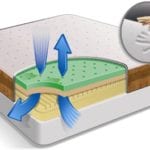