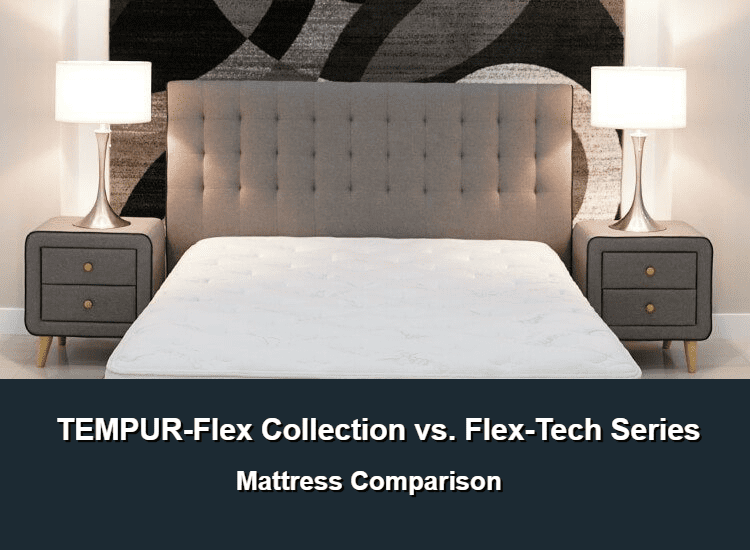 A Mattress Comparison of Two Collections

The Original Manufacturer of Memory Foam

TEMPUR-Pedic is the original manufacturer of mattresses made of visco-elastic foam (more widely known as memory foam). This pressure-relieving material was first developed in the 1960s for the National Aeronautics and Space Administration (NASA) to cushion astronauts at launch. Twenty years later it was released for commercial development. Fagerdala World Foam (now TEMPUR-Pedic) did this and introduced the first mattress made with “Swedish Tempur Material” in 1991. This became popular and was soon followed by other brands of memory foam mattresses.

About a decade-and-a-half later, Dr. Rick Swartzburg, a certified chiropractor, developed a three-layer mattress (the Tri-Pedic) with two memory foam layers of different densities. This addressed two issues related to high-density memory foam in the top of memory foam mattresses: a slow initial response, and heat build-up. This was the beginning of Selectabed, the bedding manufacturing arm of Relief-Mart.

TEMPUR-Pedic responded with its own multi-layered mattresses, a pattern now common among memory foam mattress brands. TEMPUR-Pedic mattresses, with their quality foam and construction, have remained the standard by which memory foam mattresses are judged. Meanwhile, Selectabed, although a smaller operation less widely known, has been producing highly-rated mattresses and pillows, such as Tempflow, Snuggle-Pedic, and Air-Pedic.

Branching Out with Air

In 2013, TEMPUR-Pedic departed from their foam-only format by introducing the TEMPUR-Choice Collection, two models with air support, memory foam-air hybrids. “Choice” referred to the adjustability of support in an airbed. This was a challenge to Sleep Number, the leading manufacturer of adjustable airbeds. Selectabed also set up an adjustable airbed line, Air-Pedic,

TEMPUR-Choice Collection lasted until the introduction of the TEMPUR-Flex Collection, when its two models were moved to Special Solutions. A year later, these models were discontinued.

Branching Out with Coils

In 2016, TEMPUR-Pedic took another departure from its foam-only heritage with the introduction of the TEMPUR-Flex Collection. These were classic hybrid innerspring mattresses with coil support underlying the foam layers. Interestingly, this was 3+ years after the 2012 merger of TEMPUR-Pedic with Sealy to form Tempur-Sealy International. Sealy and wholly-owned Stearns & Foster (S&F) had based their reputations on innerspring mattresses. After this, Sealy introduced an all-foam line, Sealy Optimum – now Sealy Conform.

Now it was TEMPUR-Pedic’s turn to borrow from its partners by using coil springs. The support cores of TEMPUR-Flex mattresses consist of wrapped pocket coils, which are highly conforming. The TEMPUR-Pedic (T-P) descriptions say the coils are “closely spaced” in the cores. This bears out when compared to other brands. The coil count in a King-size TEMPUR-Flex mattress is 2070. By comparison, it is 1063 in Beautyrest Platinum models, 1362 in Beautyrest Silver, 1260 in Serta Blue Fusion, 1224 in Sealy Posturepedic Hybrids, and 1954 in the Stearns & Foster Estate Collection. Only T-P partner S&F has higher counts: 3934 in its Reserve No. 3, and 4636 in Reserve No. 2 and Reserve No. 1. 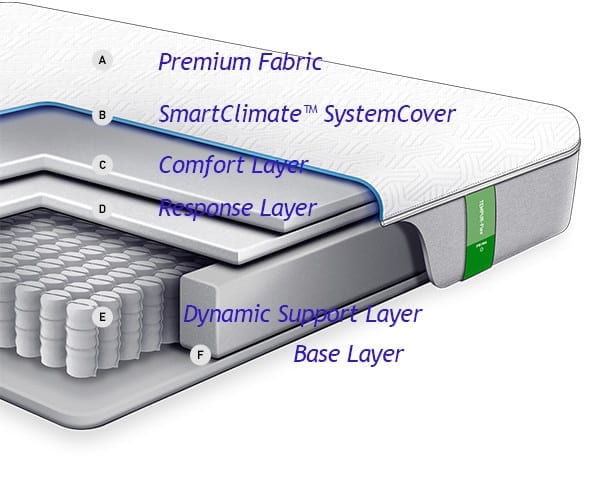 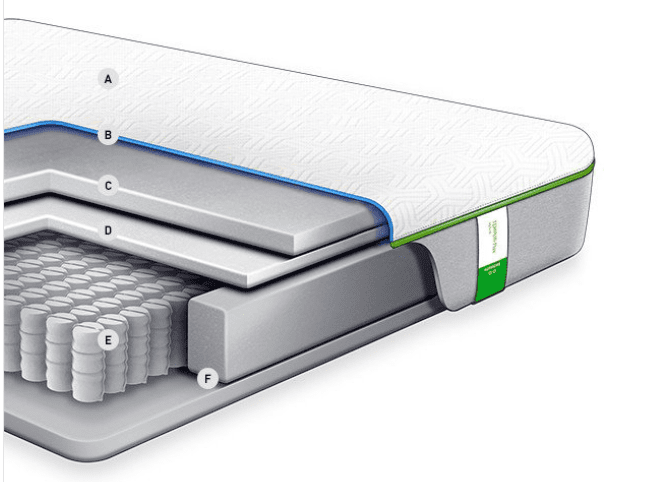 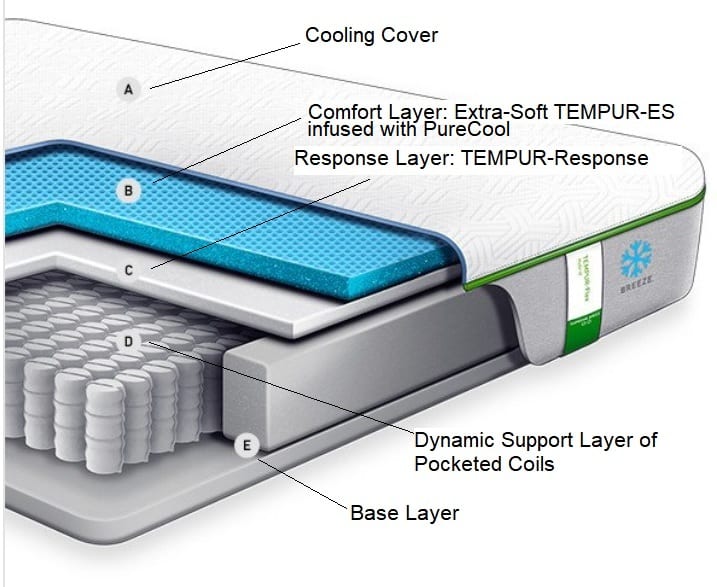 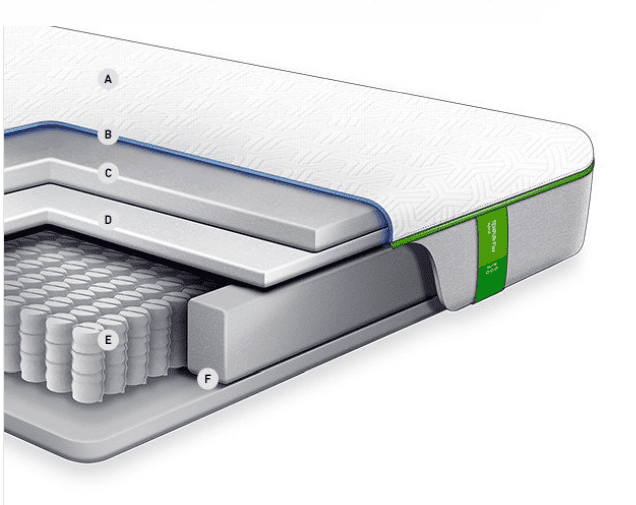 Another Kind of Hybrid

In 2018, Selectabed introduced another kind of memory foam hybrid mattress, Flex-Tech. Instead of coils, the support core is Resili-Flex, what Selectabed calls “spring foam.” This foam has been engineered to have the same kind of resiliency as metal springs. One cited advantage is smoother support. 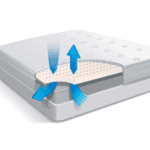 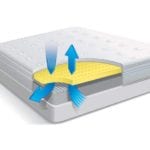 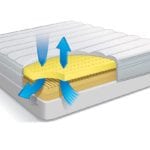 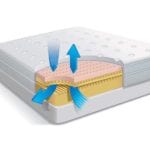 TEMPUR-Pedic and Selectabed target the same market with their hybrid mattresses — memory foam mattress shoppers who want the springy feel of an innerspring mattress. After all, that is the primary advantage of hybrids – offering the comfort of a memory foam mattress with the support of coils. However, they address this in different ways. TEMPUR-Pedic introduced coils, while Selectabed developed a support foam with the springiness of coils.

The support of coils is defined by the placement of the coils. The diameter of a coil is a unit of support. The layers of foam may smooth this out, but not completely. Some sleepers might not notice, while others will still feel the coils. For those customers who would still feel the coils, the four Flex-Tech models offer springy support with the smoothness of foam.

TEMPUR-Pedic has done a good job of making coils have smoother support. With pocket coils providing conforming support, their being closely packed approximates foam. It is telling that the hybrids with higher coil counts also come from TEMPUR-Sealy. This is borne out by customer ratings. Reviews on several sources give the TEMPUR-Flex models average ratings from 4.5 to 4.7, definitely better than those for the highly touted Beautyrest hybrids. A large part of this comes from the quality of TEMPUR Material compared to most memory foam, but some of it is because of the configuration of the coils.

On the other hand, though we do not yet have reviews for Flex-Tech (on the market for less than a year as of this writing), Selectabed has a good track record for its memory foam mattresses (for example TempFlow and Snuggle-Pedic), as well as its Air-Pedic adjustable airbeds. Their Resili-Flex Foam-Spring material promises to transform foam support layers in memory foam and latex mattresses. It is already being used for the transition layers on Air-Pedic airbeds.

Years before the introduction of the Flex-Tech series (at least before September 2014), Tempflow – a Selectabed subsidiary – released the Flexia, which the company compares to the TEMPUR-Flex Supreme. In this mattress, the resilient springy material – named Flex-Comfort – is in the second layer, not the support base. Flex-Comfort, therefore, can be seen as a predecessor for Resili-Flex.

One advantage of a foam-spring support base over standars coils under memory foam is –  less stress on the memory foam. The major reason for sagging in innerspring mattress with memory foam comfort layers is the flexing underneath, which amounts to inadequate support for the memory foam. In this regard, TEMPUR-Flex mattresses perform better than most memory foam-innerspring hybrids because of their tight coil array. It is notable that the two TEMPUR-Flex models being discontinued are being replaced by hybrid models in TEMPUR-Pedic’s new TEMPUR-Adapt and TEMPUR-ProAdapt series. Likewise, we expect Flex-Tech to perform well.

A significant advantage Flex-Tech has over TEMPUR-Flex is in cooling. Flex-Tech uses the patented Airflow Transfer System, with vented cover fabric, ventilated comfort and transition layers, and a channeled base support layer. To its credit, TEMPUR-Pedic uses ventilated TEMPUR-ES foam in the TEMPUR-Flex Supreme Breeze. However, the ventilation does not appear (on their diagram) to extend through the transition layer. This, in effect, limits the amount of cooling, which would be greater if there were more positive airflow to the coils.

For TEMPUR-Pedic, it appears that their adoption of innerspring hybrid mattresses is successful. The new series, TEMPUR-Adapt and TEMPUR-ProAdapt have hybrid models/options. They will last longer than their TEMPUR-Choice airbeds, and may even be a permanent feature. For Selectabed, considering the success of the Tempflow Flexia, the Flex-Tech Series shows promise of being successful.