Serta, a Company Known for Innersprings

Serta, founded in 1931, established its reputation with innerspring mattresses, beginning with Bonnell coils, then the standard coil type in mattresses. At this time, offset coils, invented by Frank Karr in 1926, were proprietary to Spring Air, and the rights to pocket coils, invented in 1900 by James Marshall, were held by Simmons Bedding in the U.S.A. and Marshall Mattress Co. in Canada.

Serta developed its own type of innerspring, continuous coils, in the 1980s. They are still used in several models in the Perfect Sleeper line (their first collection) and the Sertapedic line (started 20 years later). Some Perfect Sleeper models now have pocket coils (Free Flex).

In 1991, the Swedish Tempur mattress, introduced into the U.S. the next year as the Tempur-Pedic, began to change the mattress world. Now memory foam is found in mattresses everywhere, even as cushioning or comfort layers on innerspring models. Eventually, in 2011, Serta introduced its own line of memory foam mattresses, iComfort.

Following iComfort in 2014 was Serta’s line of hybrid mattresses is the iSeries, with memory foam mattress comfort layers over a pocket coil innerspring. The iSeries was merged into iComfort in 2016, with iSeries models being the same as iComfort models except for coils instead of HD polyurethane foam in the base layer. Now what were iSeries mattresses are iComfort Hybrid models, except at Mattress Firm, where they still bear the iSeries label.

The following table is not an exhaustive listing of Serta’s memory foam and gel memory foam mattresses. Serta also makes some mattresses exclusively for certain clients. And the same mattress may have different names for different retailers (such as US-Mattress), which may not be exact equivalents.

Mattresses by Model and Collection

As the table shows, most of the memory foam used in Serta mattresses is gel-infused. Serta used to claim enhanced support as a benefit of the beads of foam, but now it is simply for cooling. No mention is made in descriptions of Serta mattresses of airflow into and through the memory foam. Gel’s cooling effect is limited by its absorption of heat. To keep cooling, it has to pass the heat along, preferably to moving air. 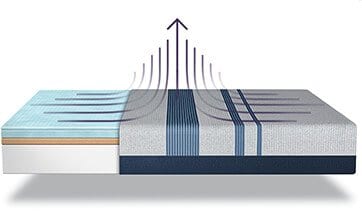 Without any other description, it appears that Serta is relying on air filtering through open-cell foam (open-cell memory foam is now standard, in contrast to the original closed-cell memory foam). However, the company now touts its TempActiv™ technology, which – without further description, and judging by an illustration – seems to be some kind of phase-change material.

In at least one model, the Serta SleepToGo 12 inch mattress-in-a-box, convoluted foam is used deep in the mattress (bottom surface of the second layer). This could be for cooling, for additional conformity, or to make the mattress somewhat lighter for shipping, or to make roll-packing easier. If for cooling, this would depend on vertical airflow through two layers of memory foam. If for enhanced conformity, its effectiveness would be uncertain. In any case, convoluted foam is subject to earlier failure, since the points are weak spots which may break or deform, leading to sagging. However, this mattress got a higher rating on Sam’s Club (4.5 with 608 reviews) than all the other Serta foam mattresses except the Blue Max 1000 Cushion Firm (4.7 with 6 reviews). 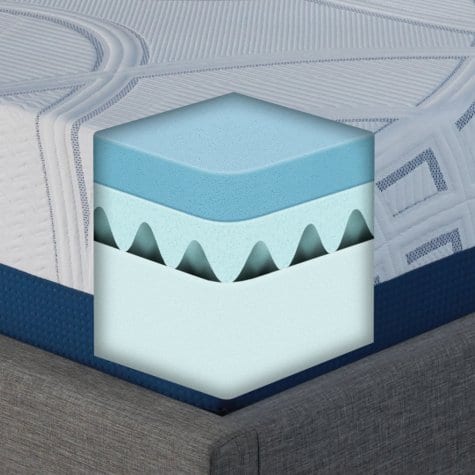 Sears also lists the SleepToGo 10 inch and SleepToGo 14 inch mattresses. The 10” has one layer of gel memory foam, and the 14” has three. The third layer in the 14” is convoluted, but the sole layer in the 10” is not. Since these are not shown on Serta’s site, it may be that they are new introductions. Else, the 12” model provides the link to Sam’s Club where the shopper can find the other two.

The Sertapedic memory foam mattresses do not have gel. These are the low-cost models, with the emphasis on support. These are also the lowest mattresses, with heights of 4, 7, and 8 inches.