Among its products, Boyd Sleep has Guest Beds and Inflatable Mattresses. Most of the beds pictured in this category are inflatable mattresses. A few are cots, and one is a thin roll-out mattress for the floor. Most of the inflatable beds – also called “occasional use air beds” by some writers – are made under license for Simmons BeautyRest, but some are made for the Thomasville label. 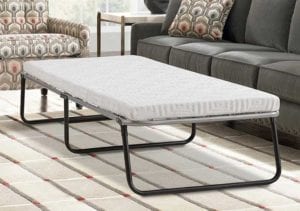 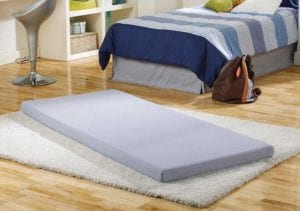 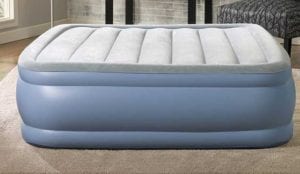 Most inflatable guest beds by Boyd Sleep are made of vinyl. However, some are made of Poly-Fusion, which is nylon infused with vinyl, stronger than vinyl alone. This is the material used in the model labeled Fusionaire. Although rubber, reinforced rubber, and urethane are usually used in bedroom model adjustable airbeds, vinyl has been the standard material for short-use air mattresses.

Most inflatable guest beds by Boyd Sleep have a top surface with some coating to give it a more desirable texture. In some models, this is a velveteen finish. A few models have a memory foam comfort layer, not really thick, but enough for a little pressure relief. 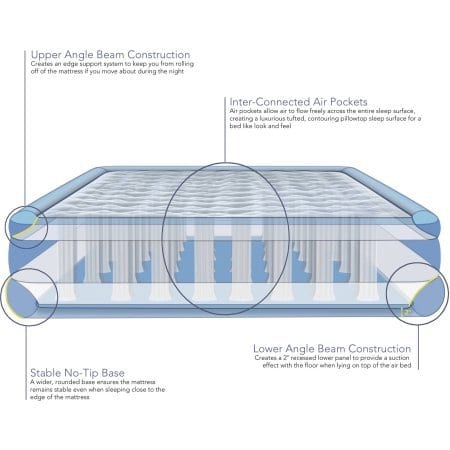 Boyd Sleep inflatable guest beds are made under two brands, Simmons and Thomasville. Most Simmons models are BeautyRest branded, but one is BeautySleep.

Simmons BeautyRest Air Beds (made by Boyd Sleep since 2006 or before) are inflatable guest beds, which can be brought out of storage (closet, attic, or garage), then deflated, rolled up, and put away after the guests have left. 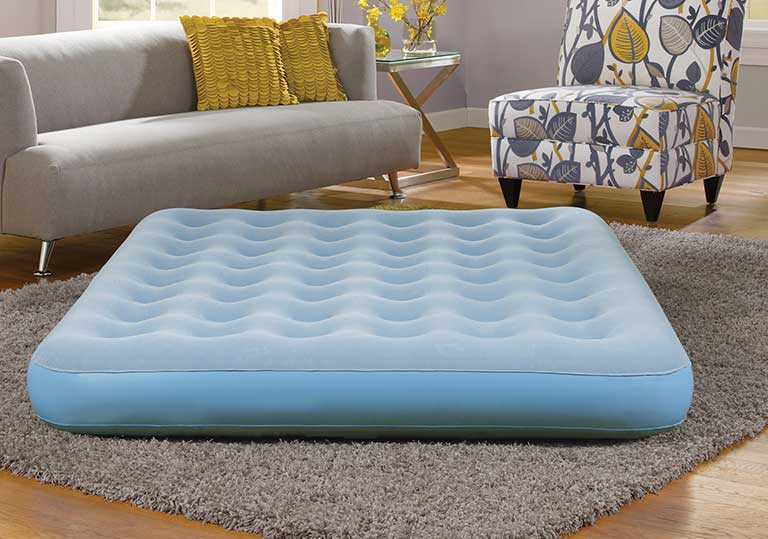 In American usage, temporary inflatable beds are commonly called air mattresses. It seems that Simmons chose to call theirs air beds to identify them with the permanent airbeds designed and sold for regular bedroom use. These are certainly not the common camping air mattresses we grew up with. Some of their models are on the list of top temporary air mattresses by the Washington Post.

BeautyRest air beds range from 9” to 19” in height. The air chambers in most are tall and narrow running head-to-toe, and only share air at the input valve. This mostly avoids hammocking and minimizes motion transfer between sleeping partners. Some have lumbar support. Most have an inflatable raised border around the top. At least two models, the Luxurious Memory Foam Air Bed Mattress Pillowtop and the Memory Aire, have a layer of memory foam on top.

Simmons BeautyRest has an internet outlet page selling their guest airbeds, but most are sold through other sites (some in stores), including Walmart, Wayfair, Amazon, Overstock, QVC, and many others. A few are sold by Boyd Sleep’s retail outlet, The Bedroom Store. Some models are available only in Queen size, while some are also available in Twin and/or Full.

Several of the Simmons BeautyRest guest airbeds are:

These beds are made for Simmons BeautyRest through their licensee, Sleep 2000 Inc. – Express Beds, which is either a subsidiary  of Boyd Sleep or a company under contract for manufacturing and distributing temporary use air beds. 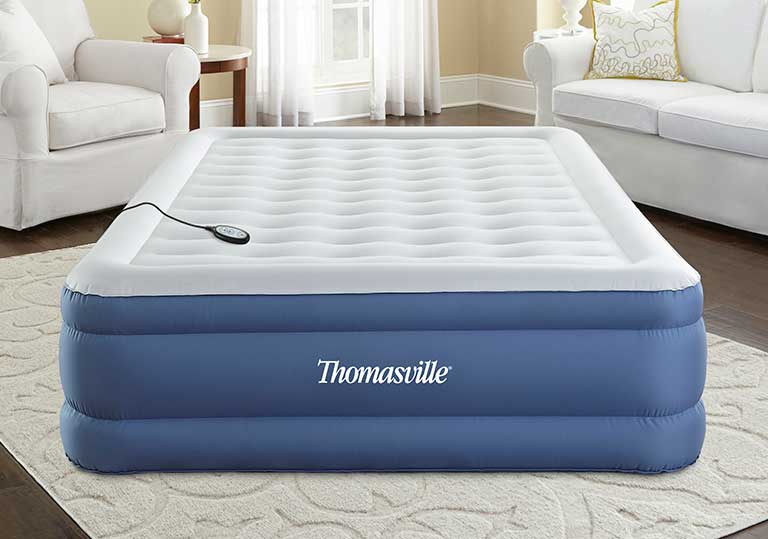 There are two Thomasville guest air beds, both labeled Raised-Profile Air Beds: Thomasville Luxury Suite Pillow Top Inflatable Air Mattress and Thomasville Adjusta Comfort Pillow Top Inflatable Air Mattress. Both Luxury Suite and Adjusta Comfort are 18” high, use Boyd Sleep’s DuraTex™ Fusion Technology, have built-in air pumps, use wired remote controls, have wavy vinyl beams (dividers) between the vertical air chambers, have edge support, and come with a carrying/storing bag. They have the same dimensions, but differ in weight. The Adjusta Comfort weighs 20 lbs, but the Luxury Suite is only 18.65 lbs. Here are a few of these features:

DuraTex™ Fusion:  This is the same as what is used in the BeautyRest Fusion Aire, where it is called PolyFusion. Whereas the other models use heavy-gauge vinyl, DuraTex™ PolyFusion is polyester blend fibers or fabric fused with vinyl. This vinylized fabric is more resistant to punctures and rupturing than vinyl alone. It also costs more.

Built-in Air Pumps:  The users of many guest air beds, including some made by Boyd Sleep, need an air pump to inflate the bed. Others have built-in air pumps, which eliminate the bulky air pump either hanging onto one end of the air bed or attached by a hose. This makes it practical for sleepers to adjust the air pressure while the bed is in use.

Remote Controls: This alone distinguishes the Thomasville inflatable guest beds from the Simmons BeautyRest models. BeautyRest airbeds with built-in pumps have a control panel on one end of the mattress. The Thomasville models have wired remotes. This makes it easier for sleepers to adjust the firmness of the bed. Since this is a put-away-after-use bed, the wired remote stays with the bed. Wireless remotes are OK for bedroom airbeds, but it essential to keep the remote with a temporary bed. 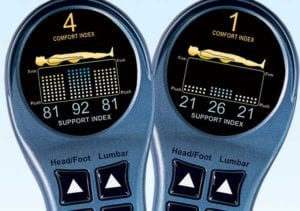 Curved Beams: The “curved beams” named in descriptions of Thomasville Inflatable Air Mattresses are the walls of the air chambers. The “curve” is wavy. High-loft air mattresses need more interior stabilization than lower models. One way is to have several air support levels. Another is to have narrower, beam-shaped chambers. The walls between the chambers resist sagging, but are still flexible, unlike the foam dividers between Sleep Number air chambers. Depending on how they are attached to the top and bottom of the air bed, they should strengthen the sleeping surface. According to the brochures, these should give the beds a “Contouring Mattress-Like Feel.”

Lumbar Support: At least one inflatable guest bed has adjustable lumbar support. This is not the same as in 6-chamber mattresses, but added air support on top in the middle.

Here is where the difference in weight between the two models is accounted for. In the Adjusta Comfort model, they are tagged as Oval iFlex Beams and are thicker, therefore slightly heavier. These are the same as the “Curved iFlex™ Beams” in the Simmons BeautyRest Extraordinaire iFlex Air Bed.

Responding to a question on Amazon about country of origin for Thomasville inflatable guest beds, the manufacturer answered, “This bed is designed and engineered in the USA and made in China, with US paid employees doing Quality Control.”

Inflatable guest beds by Boyd Sleep get mixed reviews from customers. So far, all of those reviewed are Simmons BeautyRest models, which are sold and reviewed on Amazon and Walmart, though a few appear on other sites. There are vastly more customer reviews (1097 overall, 388 VCRs (verified customer reviews)) on Walmart.com than on Amazon (81 overall, 56 VCRs). The Thomasville inflatable guest beds, introduced late in January this year, do not yet have reviews.

VCRs are 69% of all reviews on Amazon and 35% on Walmart. One reason for so many more reviews than those by verified customers is some customers who have bought an inflatable guest bed elsewhere want to post their reviews where they can be seen by more shoppers. For the beds which have received the most reviews, the Simmons BeautyRest Hi-Loft Inflatable Air Mattress and the Simmons BeautyRest Queen 19″ Sky Rise Raised Pillow top Air Bed Mattress, the average VCR rating is notably higher than for all reviews, 90.09% to 83.82% for the Hi-Loft, and 87.88% to 84.88% for the Sky Rise. Meanwhile, on Amazon the two categories of reviews are close: 66.15% to 65.49% for the Hi-Loft.

Evaluating the ratings themselves (1 to 5 Stars), the proportion of VCRs is much higher for 4 and 5 stars then for 1 or 2 stars. It is evident that for inflatable guest beds, those who purchased their beds elsewhere are more motivated to post reviews on Amazon or Walmart.com when they are very dissatisfied with their purchases. The most extreme case are the 1-star and 2-star reviews for the Sky Rise on Walmart.com. 93.94% of 1-star and 93.75% of 2-star ratings are not from verified customers.

The aggregate average of all the reviews of Simmons BeautyRest inflatable guest beds on Amazon and Walmart.com, weighted by the number of reviews for each model, is 4.01 of 5 Stars (80.19%). The VCR aggregate rating is 4.05 (80.99%).

Most of the negative reviews – almost all, in fact – are about loss of air through leaks, through holes and split seams, and through valve problems. By the nature of temporary air mattress use, with inflating, deflating, rolling, then unrolling again, there are plenty of opportunities for punctures, cuts, breaks, and other breaches. Then too, there are detailed instructions for initially inflating the mattress, and one has to wonder whether these instructions have been correctly understood and followed in some of these cases.

Most of the pros are generally in the “I like it” category, but adjustability, consistent support, good height for getting into bed, and ease of use are among the commonly named pros. 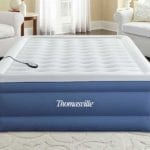