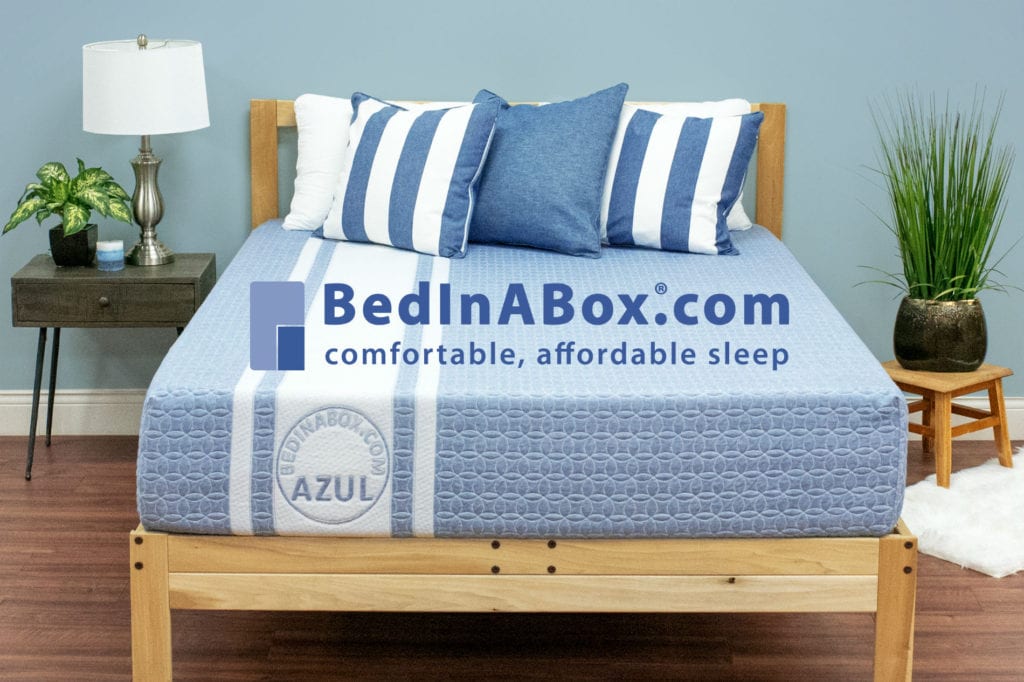 The Prototype for Boxable Beds

If there was a prototype for the current trend of boxable mattresses sold solely online, it is BedInABox (BIAB). Located in Johnson City, TN, the company was started in 2006 with the goal of making affordable memory foam mattresses. BIAB developed their own process for compressing mattresses and packing them into shippable boxes, hence the name of the company. Two years later, they began selling only online.

Sleep Innovations, using the process developed by Magniflex, may have also been compressing their mattresses and fitting them in boxes, but theirs were sold in stores –and still are – and on retailers’ websites, while BIAB’s have been sold online through direct sales. It was eight years later that Casper Sleep ignited the current trend with their one mattress-in-a box model, a memory foam/latex hybrid.

BedInABox tries to meet the needs of more than one segment of the population. Therefore, they have more than one mattress to meet different needs and preferences. This stands in contrast to the startups of the current boxed bed trend. They opened with single-model offerings designed to appeal to the middle. Now they are branching out with new models or options.

In 2014, BIAB had seven models (as reviewed on Beds.org), and they have seven models now. However, these are not exactly the same. Three have been discontinued, two new models have appeared, and a variation of one is now listed as a separate model. The surviving models have undergone a few adjustments, and names have been altered to differentiate the new versions..

Each model has a unique cover composition. Materials include silk, rayon, Tencel, and/or PCMs (Phase Change Materials). Some covers are quilted, while others are not. 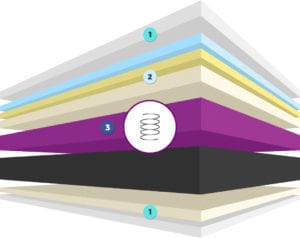 All BIAB models except Adagio (a hybrid) have the same high-resilience polyurethane foam base layer material of Sure Align Support Foam. On most foam mattresses, the base layer has a 1.8 lb/ft³ density. It is 2.2 lbs. or 2.4 lbs. in some BIAB mattresses. One model, Azul, has two base layers, one 3” of 1.8 lbs, and one 5” of 2.2 lbs. Essentially, the 3” 1.8# foam acts as a transition layer.

Most comfort layers in BIAB mattresses are memory foam

Some BedInABox models have a top layer of BIAB’s CoolRest Gel Memory Foam. The gel infusion is for cooling, but scientific evaluation of this claim agrees with Dr. Rick Swartzburg’s conclusion that the cooling effect of gel is limited. The gel has only two means of cooling: absorption and conduction. As with any material, gel can only absorb so much heat, and this largely depends on its temperature at the time of contact. And conduction only works when there is a place to conduct the heat where it can be released.

BedInABox mattresses were overwhelmingly rated “Excellent” for temperature on GoodBed.com. This may be partly due to the gel infusion. Other factors also factor into the temperature of a mattress for sleeping, especially breathability. BIAB’s memory foam is open-cell, allowing some air to filter through. We saw no mention of perforation on descriptions, but this does not rule that out.

By contrast, Dr. Rick Swartzburg has a video demonstrating the breathability of the AirFlow Transfer System, which is an option for Tri-Pedic mattresses and a standard feature in TempFlow models. Open-cell structure lets a little air flow through the foam, and perforation allows more, but the most airflow is achieved by pairing perforation of the upper layers with channels in the top surface of the support layer to direct air to the edge of the mattress.

BedInABox does not indicate how much gel is infused into their CoolRest Memory Foam. Gel does affect the feel of the memory foam, and the form of the infusion influences this effect. Though several manufacturers boast of the feel, Dr, Swartzburg says it takes away from the benefits of the visco-elastic material. It is also noted that gel beads have a tendency to dislodge within the foam.

Among other comfort materials are foams named by BIAB as PurResponse™  and AirRest™ Adaptive Foam. PurResponse is designed to blend the properties of latex and memory foam, making it almost a latex-like foam. AirRest is described by BIAB as “a cross between memory foam and standard [polyurethane] foam.” It uses “trapped air” to make it more resilient, tempering memory foam’s conformity.

Adagio is the only current BIAB mattress with coils. They call it a “hybrid” since it has foam comfort layers over coils. These are pocket coils, which rival memory foam in conformity. However, like latex, they still push up on a sleeper’s body, exerting some pressure. Adagio is in the BedInABox lineup for those customers who prefer the feel of an innerspring mattress, but want the benefits of the comfort foams.

The covers play a significant role in temperature moderation for BedInABox mattresses. On the PacBed Original, it is thin and breathable. Tranquility’s cover uses Tencel (Lyocell), a regenerated cellulose fiber (similar to rayon) which is structured to wick moisture away from the sleeping surface to evaporate with a cooling effect. The cover of Silk Elegance is a blend of rayon and silk, which also wicks moisture for cooling. Serenity takes a different tack. Its quilted cover has BIAB’s CoolRest Adaptive Material, replacing the Outlast used in the prior version. Cooling here is via phase change materials, which are more effective than gel, but still have limits.

The three models of Selectabed’s Tri-Pedic Series are three-layer mattresses with two layers of memory foam of differing densities. This concept worked well enough to be adopted by Tempur-Pedic. Four BedInABox models have two layers, two have three, and one has four.

Another Relief-Mart subsidiary, Snuggle-Pedic, now has a boxable mattress on the market. Like most BedInABox models, it has two layers. It also uses the AirFlow Transfer System (ATS). The two layers perform better after compression and expansion than three layers, and the ATS gives it a definite advantage in cooling over other boxable bed brands.

Two-layer construction may be more suitable for compression and roll-packing. BIAB uses water-based glue to adhere the foam layers, letting it thoroughly dry before compressing and rolling the mattresses for shipping.

BedInABox sells its mattresses primarily from its website. However, six of their models are listed on Amazon. These are sold by two third parties, Bed DRS Distribution LLC and Give5ToCancer.

Bed DRS is a chain of sleep stores in the Phoenix, Arizona, area. They carry BIAB products.

BedInABox has a 120-Night sleep trial on all its mattresses. The warranty on the PacBed Lite is for 10 years. For all others it is 20 years. The reason for the shorter warranty on the PacBed Lite could be the lighter foam in both layers. The density of its memory foam is only 2.5 lbs/ft³, and the 1.8 lbs/ft³ base layer is not firm enough to support such a light memory foam, shortening the expected lifetime. Most foam experts say that memory foam should be at least 3.5 lb/ft³ for adequate support and durability.


We calculate our ratings in accordance to our Verified Review Policy.

Ratings of BedInABox and its mattresses can be found on the BIAB site, ResellerRatings, GoodBed, Amazon, and Sleep Like the Dead (STLD). There are only 15 reviews on Amazon.

Judging from the Better Business Bureau report and reviews by GoodBed and Sleep Like the Dead, BedInABox has very high customer satisfaction. Their mattresses have a longer average lifespan (over 6 years) than most memory foam mattresses. Their foams are made in America by BASF, combining German and American quality.

After evaluating experiences of 283 owners in several categories (such as owner satisfaction, durability, support, reduction of back pain, etc.), STLD gives an A+ rating to BIAB. They calculated the owner satisfaction rate as 83%.

GoodBed has a total of 96 ratings by owners of seven BedInABox mattresses – four current: PacBed Lite, PacBed Original, Tranquillium, and Serenity; and three former: Natural Silk Elegance Comfort Adjust Gel, Natural Silk Elegance Gel, Purity Latex, and PacBamboo Gel – and 414 ratings overall of the company and its products. As is typical with GoodBed ratings, the owner satisfaction rate (86%) is higher than either the ratings on specific issues (3.4 stars, 68%) or the average rating for the models (3.43, 69%). However, for current models only, there are 68 ratings with a 4.21 average rating (84.12%).

Reviews on Reseller Ratings are primarily for the business itself as a seller. The average rating is 4.85 of 5 stars (97.03%). However, the products used by the reviewers are identified. These are the same as reviews on the BIAB site, since ResellerRatings is a collector/verifier of customer reviews.

A total of 662 customers reviewed and rated BedInABox mattresses on the BIAB site. More than half of these (396) are for the PacBed Original. The highest-rated model is the PacBed Lite with 4.79 (95.71%), and the lowest is the Adagio, with 4.16 (83.16%). The weighted average of all models is 4.21 (84.11%), which is essentially the same as the GoodBed rating for current BIAB models, but with greater confidence because of the larger sample.

Several pros and cons of BedInABox mattresses are noted in reviews and comments.

Durability: The average lifetime of BIAB mattresses is longer than for most other memory foam mattresses. This may be partly due to the use of base foams with a density greater than 1.8 lbs.

American Made: All components of BIAB mattresses are made in the USA. This means higher quality foam than if it were made in Asia.

Motion Isolation: Like other memory foam mattresses and pocket coil mattresses, BIAB mattresses have no transfer of motion from one sleeping partner to the other.

Sleeps Cool: BIAB mattresses have a lower rate of customers complaining about being too warm or hot than most other memory foam mattresses.

Too Firm for Some: Some customers say their BIAB mattresses are too firm, while there are others saying theirs are too soft. 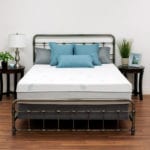