What Is a Boxed Bed? 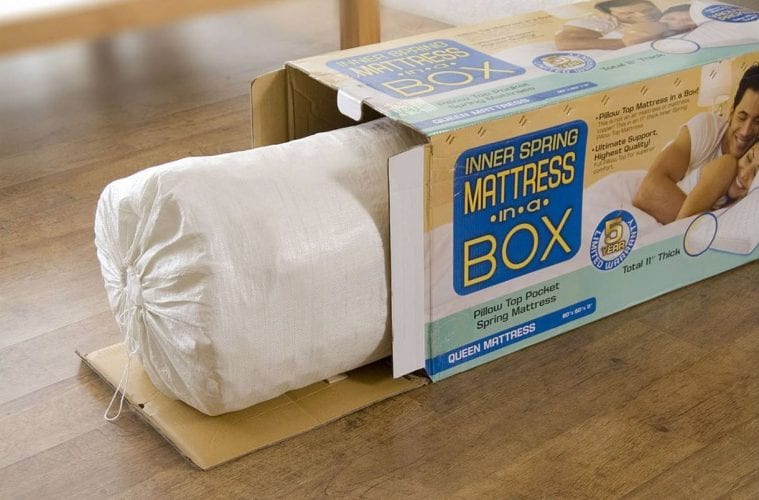 A boxed bed, commonly known as a bed-in-a-box or mattress-in-a-box, is a mattress which is compressed, sealed in plastic, rolled, and fitted into a box for shipping by regular package carriers such as FedEx and UPS. Since 2014, the proportion of mattresses boxed for shipment has been growing. For the current crop of young adults, the way to shop for mattresses is online, and the product is usually a boxed bed. We can call this the Boxed Bed Trend.

We use the term “boxed bed” for several reasons: (1) to avoid confusion of other brands with BedInABox, (2) to include both “bed-in-a-box” and “mattress-in-a-box”, (3) it is simpler to write and say, and (4) to cover foundations and adjustable bases which are now disassembled and shipped in boxes, accompanying the mattresses or separately. We are not alone in using “boxed bed” for a mattress-in-a-box. An Internet search will show several sites using the same term, probably for the same reasons.

The term “bed-in-a-box” originates with Bill Bradley in Johnson City, Tennessee. He heard of Magniflex in Italy compressing mattresses and shipping them in duffel bags. He used his experience as a machinist to build a machine to compress, wrap, and roll a mattress, Instead of putting it into a bag as Magniflex did, he put it into a box. He called this a “bed in a box” and named his company BedInABox.

That was in 2006. BedInABox was successful (and still is), but didn’t shake up the mattress industry. Bradley expanded his market by selling online, which became his only sales outlet, but this venue – still something of a novelty at the time – would change eight years later with the introduction of Casper and Yogabed. These two start-up companies plus Tuft & Needle (started two years earlier) astounded the mattress world with their huge volumes of sales. Since then, sales of boxed beds have more than doubled.

Boxed beds sold online have become so common and well known that many people think that all mattresses sold online are boxed beds. Some also think that the only place to buy a boxed bed is online.

However, there are very many mattresses sold online which are not compressed and fitted into boxes, but are shipped as fully expanded mattresses. This includes mattresses by Saatva. Also, there are online mattress-selling sites, such as US-Mattress, with all kinds of mattresses which are not boxed. Internet marketplaces, such as Amazon and Overstock, have facilitated the increase of boxed bed brands available online.

A Multitude of Brands

At this time there are over 200 brands of boxed beds, including more than 100 by companies that started after Tuft & Needle in 2012 and Casper in 2014. Besides these, many established mattress companies have boxed beds, often under their own brands.

Trends within the Trend

By now, the Boxed Bed Trend has become more than a movement. It is an apparently permanent segment of the bedding market. Those who have watched its development have seen changes along the way, trends within the trend. To outline these, we’ll begin at the beginning.

Tuft & Needle, the first of the startups, produced a mattress that was not a memory foam mattress, and not a latex mattress. The featured polyurethane comfort foam was engineered to have characteristic between those of memory foam and latex. One review quipped that they wished it was either memory foam or latex. However, the mattress’s success speaks for itself.

Manufacturers had been bringing out varieties of memory foam, emphasizing cell structure, treatments, and additives (such as gel memory foam). Latex Mattresses have their own variety, with Dunlop or Talalay processing, all natural latex, synthetic latex, and natural-synthetic blends. Now, six years since T&N’s debut, we have memory foam substitutes and latex-like foams.

The hallmark of the first upstarts in 2012 and 2014 was one model, one market method. For the most part, the early brands (except BedInABox) had only one firmness level, reminding people of the “one size fits all” claim from years before. “One size fits all” was the description of certain stretchable items of clothing a generation ago, such as socks, ball caps, and gloves. That generally worked when the item had a means of adjustment, such as a strap on the cap, but didn’t work for everyone on most items.

Realistically, we know one size does not fit all. The startups, like Casper and Yogabed, knew that one firmness does not fit all, and they said so. What they did was make their mattresses to suit the broadest segment of consumers, the wide middle. This was good enough to propel them to fantastic sales volumes.

It was at this point that following startups challenged the upstarts with two or three firmnesses. One brand Helix, advertizes itself as being customizable. Now most have a choice of firmness, even different models, a justification of BedInABox’s variety. Casper even has a high end luxury model, The Wave.

Bradley started BedInABox with the idea of convenience and cost savings in shipping, then went online to cut the cost of marketing, forsaking supplying stores. The first upstarts were started with the same goals. Whereas most new companies had started trying to succeed within the mainstream, the boxed bed firms started outside the box and challenged the mainstream.

Mainstream established mattress companies took up the challenge. They came out with boxed beds of their own. The names of some identify the company, for example Cocoon by Sealy and GhostBed by Nature’s Sleep. Brooklyn Bedding is turned the other way; the one-model boxed bed (now three models) kept the name of the company, while the mainstream part with several models took the new name, and DreamFoam Bedding says its mattresses are made by Brooklyn Bedding.

Selectabed took another route to a boxed bed. They first established their Snuggle-Pedic shredded memory foam pillows as a separate brand with its own website and sold on Amazon. Later, they introduced the Snuggle-Pedic mattress, also sold on Amazon. In a sense, this is being imitated by MyPillow, which now has the MyPillow Mattress.

Back to the Store

At first the startups moved away from stores. The BedInABox mattresses were delivered to brick-and-mortar stores. The packaging saved on manufacturer delivery costs. It saved cost for the retailers, too – the customers could take their mattresses home instead of waiting for them to be delivered. Then BIAB bypassed stores for the Internet. This was the model for Tuft & Needle, Casper, and Yogabed.

When Casper opened shop, they did not have a shop – store, that is. They were startled by a knock at the door, a customer wanting to try out a mattress. T&N began with one showroom, next to their plant. Casper did set up a showroom in New York City. This was the pattern for boxed bed companies: no stores other than one or two showrooms.

However, this began to change. By 2017, T&N had four showrooms, all west of the Mississippi. Then this year, Casper announced that they would be opening many brick-and-mortar stores. They have 20 so far. And T&N is opening one in North Carolina.

Pillows sold by mail order, phone, or online have been shipped by mail or package delivery services for a long time. Then came boxed mattresses, carried by UPS and FedEx. Now manufacturers are shipping bed frames and foundations (aka box springs) hinged and folded. Even adjustable bases are going for a ride on FedEx and UPS – designed for customer assembly, portions are shipped in separate boxes in the same load to be put together in the bedroom.

Signaling another trend in the boxed bed movement, Tuft & Needle agreed this year to become a part of Serta-Simmons with its co-founders becoming part of the corporate management team. This appears to be the beginning of the renegade upstarts coming into the mainstream at or near the top. From now on, instead of being another segment of the mattress market, boxed beds with be an important part of a mattress company’s portfolio. A future generation will not realize that boxed beds used to have companies of their own.